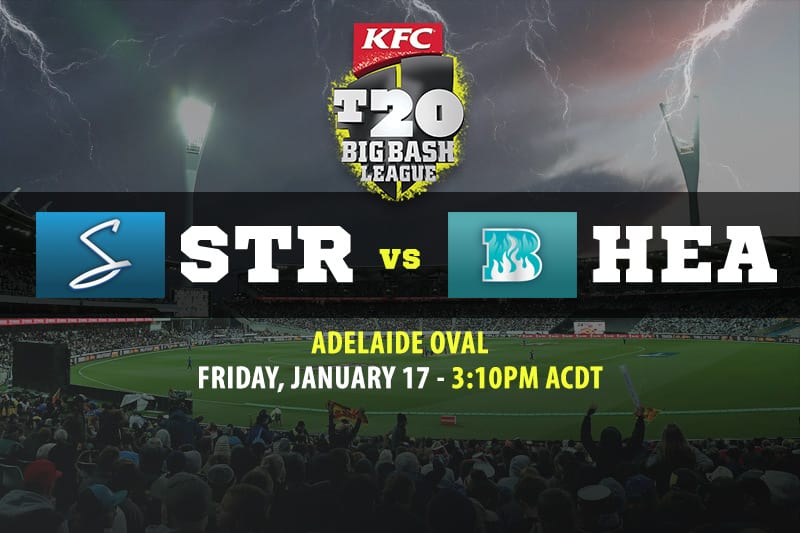 The 2019-20 Big Bash League fixture has scheduled the Adelaide Strikers and Brisbane Heat to face off for the second time in four days.

The two teams met at The Gabba on Tuesday, when the Heat bowled out the Strikers for only 110 and then ran them down within 16 overs.

It was a complete and composed performance from the Brisbane Heat, who were spectacular with both bat and ball.

South African superstar AB de Villiers made 40 from 32 balls on his Big Bash debut and Matt Renshaw guided the Heat home with an unbeaten 52, but it was James Pattinson who stole the show with five wickets.

While both teams are in the mix for the BBL finals, the Adelaide Strikers need to arrest a form slump that has seen them lose four of their last five games.

Travis Head Strikers top runscorer – $4 at Bet365
Travis Head is a first-class player in more ways than one. The young South Australian normally finds a way to break through when under pressure, but on Tuesday night he only managed two boundaries and before going out. Head will take on his Test teammate James Pattinson and make the most runs for the Strikers.

AB de Villiers Heat top runscorer – $3.75 at Bet365
With Chris Lynn going out for a golden duck, someone else needed to stand up for the Brisbane Heat on Tuesday night. Enter Matthew Renshaw and AB de Villiers, who got them over the line with a 77-run stand for the third wicket. De Villiers is a modern-day great who will only get better as he settles into the rhythm of the BBL.

Rashid Khan 2+ wickets – $1.90 at Ladbrokes
Even on The Gabba’s pristine batting surface, Rashid Khan was able to use his tricky spin to snag a wicket from the Heat. The Afghani star will find things much easier when the Strikers and the Heat meet again at Adelaide Oval. Rashid has 15 wickets already this season, 10 of which have come from his four games at home.

James Pattinson 2+ wickets – $2.25 at Ladbrokes
He copped a hiding from Mitch Marsh and the Perth Scorchers in his first BBL game of the season, but James Pattinson hit back with a masterclass of fast bowling on Tuesday as he dismissed each of Adelaide’s top five batsmen. He knows how to get them out, so there is no reason he cannot do it again.

Brisbane Heat to win – $1.62 with Sportsbet
With Tuesday’s result in mind, it is very hard to look past the Brisbane Heat. They actually play better outside of Queensland, taking away the home field advantage that the Strikers would normally have. With five very strong batsmen leading the way, you can count on the Heat to do the double.