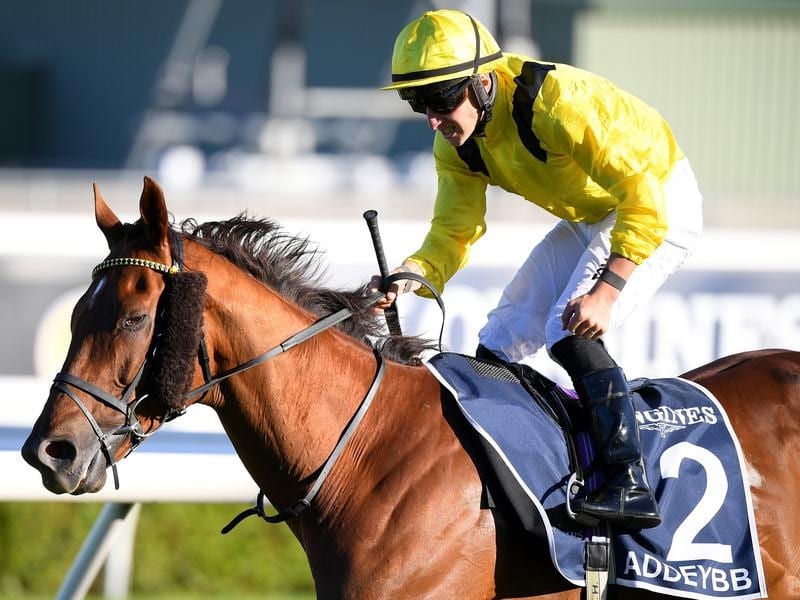 English-trained Addeybb has beaten a high-class field in the Queen Elizabeth Stakes at Randwick.

A daring long-range plan to aim Addeybb at the Queen Elizabeth Stakes has paid off in more ways than one for English trainer William Haggas.

Not only did the horse live up to his billing in Saturday’s Group One race at Randwick, he gave Haggas something to cheer from afar with racing shut down in Europe because of the coronavirus pandemic.

Australia is one of the few countries still racing albeit with strict biosecurity protocols and reduced prize money.

Haggas pinpointed the Sydney autumn as ideal for Addeybb because of the likelihood of his preferred wet ground.

The trainer also locked in his own jockey early, with Tom Marquand, who had a successful summer in Sydney, returning to ride Addeybb and stablemate Young Rascal also a Sydney winner.

Addeybb proved himself by beating Verry Elleegant to win the Group One Ranvet Stakes last month but the Queen Elizabeth, also over 2000m, had the added intrigue of Japanese visitor Danon Premium.

But the English horse was too strong, too powerful and the $4.20 favourite put 2-3/4 lengths on Verry Elleegant ($5) who passed Danon Premium($4.40) late to relegate him to third.

Haggas had planned to be in Sydney but worldwide travel restrictions put paid to that idea.

“It was terrific, very exciting,” Haggas said from England.

“I was hoping, but you never expect anything in this business.

“He was very impressive today, he really was.

“He found another gear when Danon Premium made his run.

“We have been very fortunate over our career but this is a big highlight.

“It is a big highlight because it is very rare that something you plan a long way out comes off.

“But he is the right horse. The conditions suited us when we got the rain yesterday and it looked really hard work today and he doesn’t mind that at all

Haggas said Addeybb would return to England as planned and as soon as it was possible for him to travel.

“My intention has always been to bring Addeybb home and that remains,” he said.

“I do want to run him in the Champion Stakes in our autumn, your spring, and then who knows we might well come down to Sydney again next year.”

Haggas joins Charlie Appleby as the only international trainers to win over The Championships with the latter claiming the 2017 Sydney Cup with Polarisation.

“I was kind of thinking Addeybb would be vulnerable and Young Rascal would be the one to get me out of jail,” Marquand said.

“But what a tough, straightforward, genuine horse. He just switches off, knows when to turn it on, and he just drops his head and runs for you and you don’t even have to ask him.

“It’s an honour to ride a horse like that.”