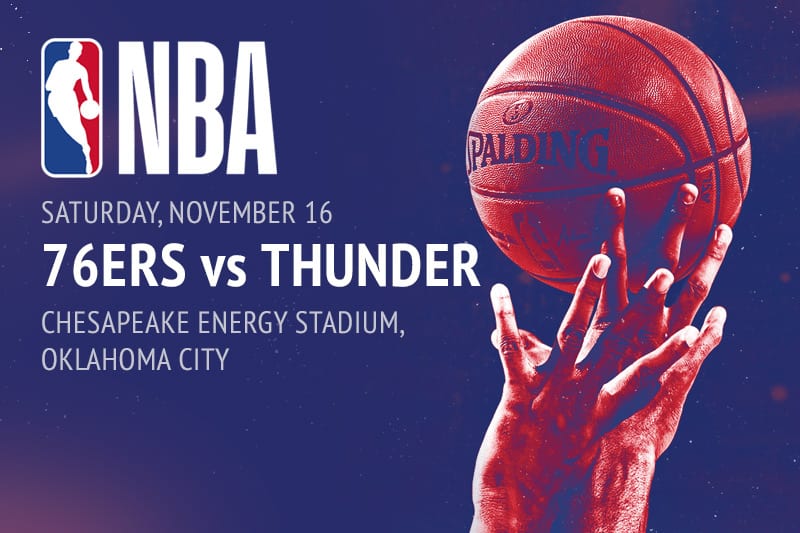 NBA Eastern Conference contender Philadelphia will make its way across to Oklahoma to tackle the Thunder, who have the edge over the 76ers in recent times.

To say that OKC is Philly’s bogey side is an understatement, as the Thunder have won 19 of the past 20 matchups, with only the most recent win going to the Sixers.

If Paul George was not injured last season, the Thunder could have won 20 straight matches against the 76ers, which would have been a historic run.

OKC and Philly are both in poor form, with the Thunder embarrassed by the Pacers and the 76ers losing to the Orlando Magic emphatically.

Ben Simmons and Joel Embiid are expected to play in this match even though neither is in peak physical condition, as Simmons recently missed with a shoulder issue and Joel is still managing his workload.

Josh Richardson also enters this game under a strange injury cloud with a tight hamstring and tweaked ankle. Although he is not listed on the injury report, he cannot be ready if he suffered these ailments only two days prior.

Bringing in Danilo Gallinari has been a solid move for the Thunder as the tall and skilful Italian has plenty to offer on both ends of the floor. His shooting prowess will trouble the perimeter defenders for Philly.

Ben Simmons over 20.5 points + rebounds @ $1.79 with Sportsbet
Last time the former number one draft pick played against the Thunder, he was facing a tenacious Russell Westbrook, but that didn’t stop him from recording a triple-double. Now that the Thunder have three small point guards, Simmons will be aggressive in the paint and have the ability to see over his defenders, allowing him to make more passes, whilst the obvious height difference will lead to more rebounds.

Shai Gilgeous-Alexander to score over 19.5 points @ $1.97 with Sportsbet
One of the highlights for OKC in the recent trade period was the inclusion of Shai Gilgeous-Alexander, who has been a success thus far. Averaging 20 points per game, the second-year guard is giving OKC fans something to cheer for. SGA has cooled off a little of late, but with his high IQ and ability to grind out the match, we can see the guard finding room against Simmons and Richardson to get 20 points up.

Tobias Harris to score over 16.5 points @ $1.87 with Sportsbet
With his knock-down shooting and poise in traffic, Tobias Harris is an underrated player that has scored over 20 points three times this season. He was the difference when the Sixers beat OKC in their last meeting, scoring 32 points with efficient percentages from the field. With injury clouds over three of the Philly starters, you can expect Harris to step up for his teammates.

Philadelphia 76ers to win @ $1.67 with Sportsbet
Before the 76ers beat OKC last season, the Thunder had an incredible 19-game winning streak over Philly, dominating them since the 2008-09 season. Now that the 76ers have Joel Embiid and Ben Simmons healthy with good players surrounding them, it is hard to see the new-look Thunder beating Philadelphia.