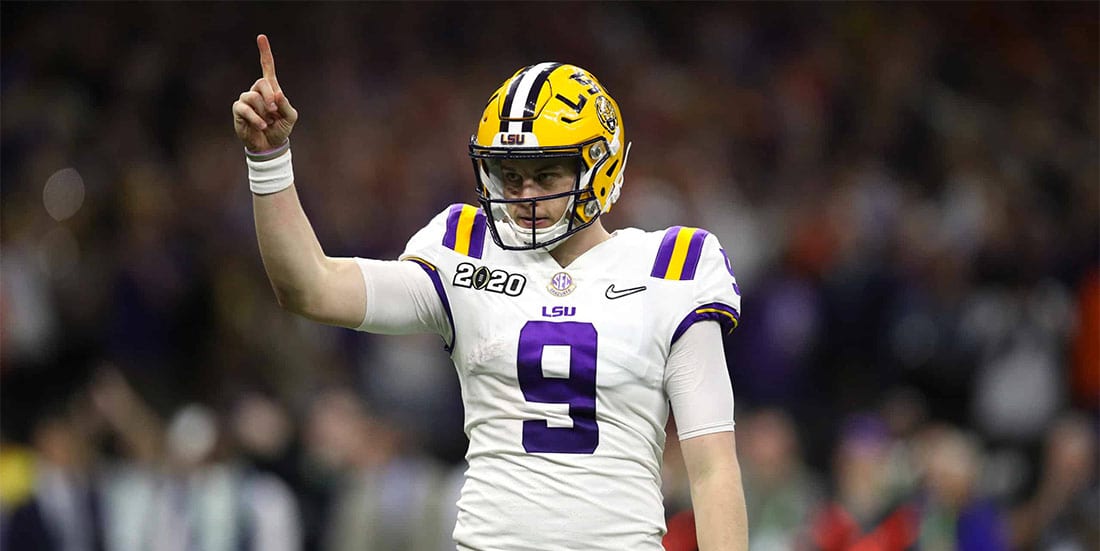 With 255 selections from 32 teams, the NFL Draft is the biggest recruiting event in the world – so big that even the coronavirus crisis has not halted its progression. Let’s take a look at this year’s top prospects and the 2020 NFL Draft betting markets that promise the best value.

The NFL Draft format is much the same as that which is used in other American sports and the AFL. Teams are placed in sequential order where they confirm selections based on which eligible players they want the most.

The teams that had the worst seasons are given the earliest picks in the following draft. This year, the Cincinnati Bengals have the first selection after going 2-14 in the 2019 regular season.

SEE ALSO: HOW TO BET ON THE SUPER BOWL

The 2020 NFL Draft scheduled to take place in Las Vegas, Nevada, but travel restrictions and other COVID-19 countermeasures mean each team will make remote selections via videoconferencing.

Live trades add to the complexity of NFL drafts. Any team can send through a trade once the event has begun, which means players may be selected by one franchise and then move to a completely different destination within minutes.

With so many selections on the table and so much going on between picks, the NFL Draft cannot be completed in just one day. This year’s event will start on the morning of Friday, April 24 and conclude on the afternoon of Sunday, April 26 (Australian time).

While there are very few guarantees in life, you can lock in the first two picks of the 2020 NFL Draft.

All signs point to Joe Burrow as the first pick for the Cincinnati Bengals. The gun quarterback is an Ohio native and would fill a big hole for the Bengals, who averaged only 17.4 points per game in 2019.

Burrow is an exceptional talent that has a calm mind and great instincts – traits that compensate for his relative lack of arm strength. LSU product has been compared to many pro QBs over the course of his excellent college career, which culminated in a Heisman Trophy nod last year.

You can put money on Burrow to be selected first in the draft, but you wouldn’t get much in return as he is an unbackable $1.005 at Sportsbet.com.au.

Chase Young is going to be the second pick in the draft, unless the Bengals pull a rabbit out of the hat by selecting him ahead of Burrow.

The ESPN rankings have Young as an even better prospect than Burrow. He is an athletic defensive end that is considered an edge, meaning he is capable of playing a unique position within the DE label.

The Washington Redskins will be salivating at the chance to steal Young with the second overall pick, as he would likely have been pick one in most other drafts. BetOnline has him at $1.06 to land in the capital.

This is where it gets interesting in the draft, as pick three has many names floating around in the media.

Sportsbet has a market for the exact order of the first three picks – in essence, a standard trifecta. As Burrow and Young are monties for the top two picks, all you need to do is figure out who the third overall selection will be.

For us, it’s a battle between Jeffery Okudah and Derrick Brown. Okudah is a cornerback and Brown is a defensive tackle, two positions where the Detroit Lions are seriously lacking in quality. Online bookmakers have Okudah at $2.25 behind Burrow and Young, whilst Brown is paying $5 to be the third pick.

Punters should also take a good look at the NFL Draft betting options for Tua Tagovailoa. The Alabama quarterback is the second-ranked signal caller in the draft pool, meaning he could jump up the order if a team needing a QB decides to trade upward in the first round.

Tagovailoa is paying $1.83 at Sportsbet to go top five, which is some of the best value in the market, while he is also rated a $5.50 chance to land in the top three alongside Burrow and Chase.