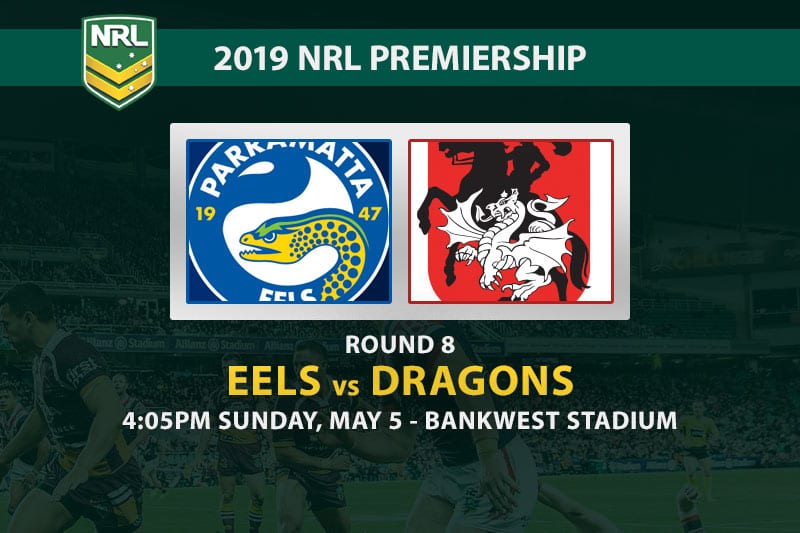 Sunday’s twilight fixture at Bankwest Stadium might just be the pick of the matchups in round eight of the 2019 NRL Premiership season.

The Parramatta Eels have the best points difference of all the teams outside the top four, but their inconsistency was highlighted in last week’s disappointing defeat at Newcastle.

Daniel Alvaro returns to the forward pack after a spell out with concussion, which pushes Peni Terepo to the bench and Ray Stone out of the squad.

Those are the only changes for Parra as they tackle a St George Illawarra Dragons side with big ambitions.

The Red V were on a four-game winning streak when they met Sydney on ANZAC Day, but it stopped there as the reigning premiers took advantage of some sloppy moments in the first half to seal a 20-10 result.

Mikaele Ravalawa starts on the wing this week, with Zac Lomax shifting to the centres and Euan Aitken demoted to the interchange.

Blake Lawrie is named at lock ahead of Jacob Host, but Dragons boss Paul McGregor could yet opt to switch the two.

Jennings has crossed for a try in three of Parra’s four wins this season. What’s more, he went on to score a brace in each of those games. If you fancy the Eels on Sunday, it is worth throwing some money behind this guy to get on the scoreboard.

Ravalawa started on the bench in last week’s loss to the Roosters, but before that he had scored in four consecutive games. With Jordan Pereira cooling down a little in recent weeks, St George Illawarra’s young Fijian winger is the man to watch.

There are strong cases to be made for both teams.

Parra have always bounced back from defeat so far this season and look very tough to beat at their new home stadium.

However, their last three results (19-0 loss to Canberra, 51-6 win over Wests, 28-14 loss to Newcastle) illustrate just how volatile this Eels team can be.

Although St George Illawarra were a bit loose in the early stages last week, they matched the Chooks for most of the game and were far from disgraced.

Even with Gareth Widdop out of action, the Dragons have plenty of talent, experience and leadership in key positions.

It should be a close one, but we fancy the visitors to edge it.