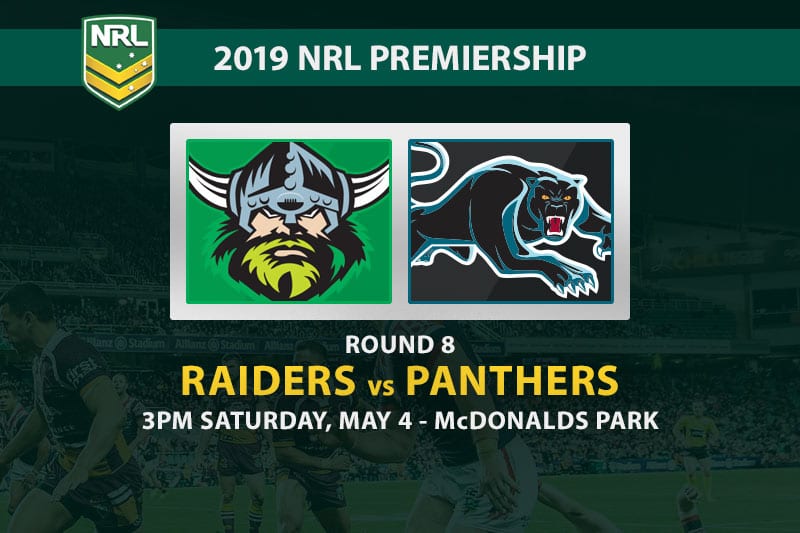 The 2019 NRL Premiership campaign heads to the country this weekend with a Saturday afternoon clash in Wagga Wagga.

It is only a short trip for the Canberra Raiders as they look to bounce back from a 24-20 loss to Manly last time out.

They will have to make do without star winger Jordan Rapana, who is out of action with a rib cartilage injury.

In comes Bailey Simonsson for his second game of the year, while Hudson Young and Cory Horsburgh move up to the interchange in place of Jack Murchie and Emre Guler.

Ivan Cleary’s men have lost four of their last five and need to smarten up if they have any intention of playing finals this year.

They showed plenty of spirit in their narrow defeat to South Sydney in round seven, but another loss would leave them a long way back.

Penrith have made no changes, with Caleb Aikens staying on at fullback and Dallin Watene-Zelezniak named at centre.

Canberra’s high-possession game means the wingers are not always their biggest scoring threats. Joey has hit the line four times this season and looks a decent bet to improve that tally at some stage in the game.

Of the seven backs named to start for Penrith this week, Maloney is the only one who has registered multiple tries this season. When the pickings are that slim, you might as well go where the value is.

Best bets for Canberra vs Penrith

Penrith’s improvement last time out makes this a much tougher call than it looked two weeks ago.

If Viliame Kikau can cancel out the influence of John Bateman in Canberra’s second row, the Panthers might just have a shot.

That said, you can bet the Raiders will be desperate to prove a point after losing a very winnable game against a depleted Manly side.

There are no glaring weaknesses in Ricky Stuart’s lineup and that is reflected in their ladder position.

Get on Canberra to cover the line and thus bolster their claim to a top-four spot.