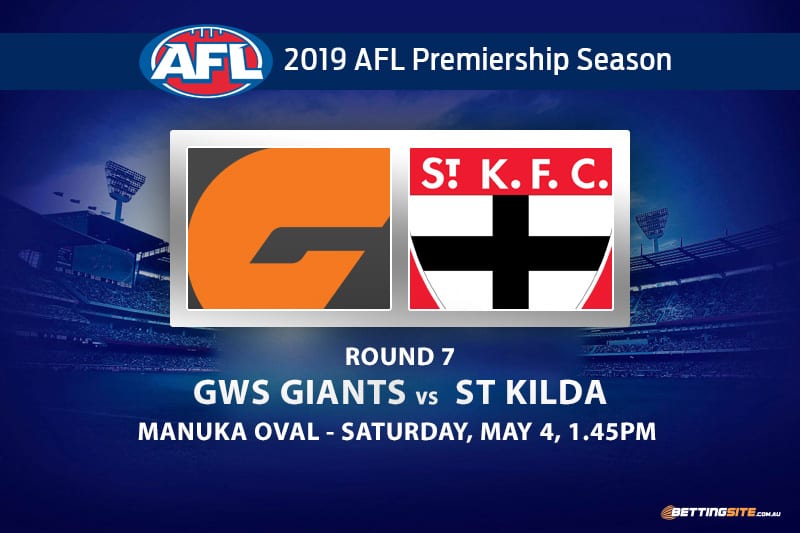 Have the GWS proven themselves a legitimate AFL flag threat?

A spate of injuries to key GWS Giants stars has left room for the Saints to make a real contest of this crucial Saturday afternoon encounter in Canberra.

The AFL’s youngest team won last week against the Swans in the NSW derby, but it was far from a bruise-free contest.

Lachie Whitfield suffered a big corky to his thigh in the first half, playing out the game in the forward 50, limping.

Captain of the club, Stephen Coniglio, was unlucky and dislocated one of his fingers, which could rule him of for this week’s match.

Both players could play through the pain, but it looks more likely that they’ll miss this clash, rather than risk further damage early in the year.

The Saints were on fire in the first five weeks of the season, but were poor last week against the Crows and conceded a game they could have won with more accurate kicking.

Despite the fact that they too keep losing players to injury, we expect the Saints to continue to bring the competitiveness and intensity that has been their new hallmark this year.

Before moving to Moorabbin to join the Saints, Jack Steele played for the Giants and was known for his ball-winning prowess. Even in his role today, Steele still has matches where he gets close to 30 disposals. With Sebastian Ross and Jack Steven winning the ball in the midfield, Steele can sneak under the guard against his old side and put in a big game.

The St Kilda backline is not filled with the biggest names, but continue to get play above their pay grade. Players like Daniel Mackenzie and Jimmy Webster have been good this season, without setting the world on fire. If all the Saints defenders step up this week, they will keep the injury-riddled Giants under 96.5.

With Josh Bruce, Tim Membrey and even Matthew Parker in the forward half, the Saints have plenty of firepower and class. The smalls for the Saints are one of the big keys to their early season success. We think the new, unpredictability of what has become a functioning forward line will help the Saints clear 10 goals most weeks.

With Jeremy Cameron and Jeremy Finlayson at one end and Josh Bruce and Tim Membrey at the other, the chances for one of these stars to kick five is not too farfetched. The game will be won in the midfield, but we think an individual bag is on the cards.

The line for this match is far too large to not take. The Saints will bounce back after their poor loss, and the Giants will enter the match with injuries. Still, the Giants should win, but a blowout will not occur. While we predict GWS will win this clash against St Kilda, the $1.22 win price is far too short.