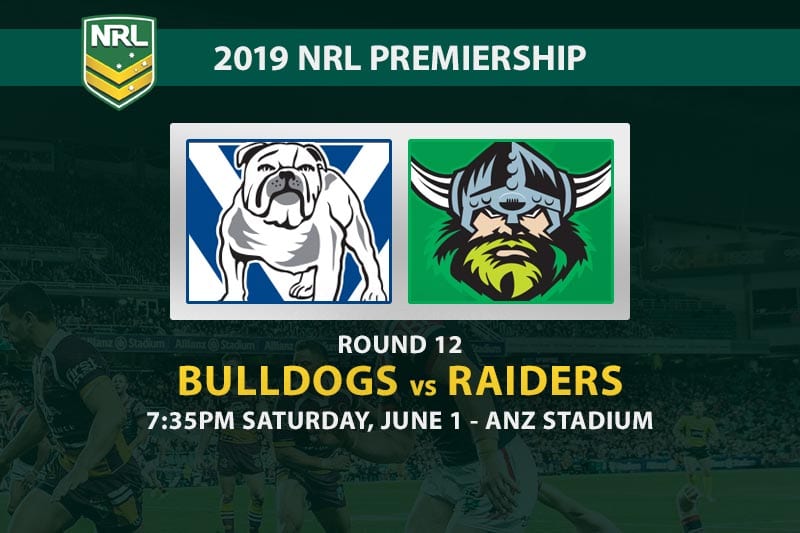 The upcoming State of Origin series has rather levelled the playing field for Saturday’s NRL clash at ANZ Stadium.

While the Canterbury Bulldogs have only one player out on representative duty, the Canberra Raiders are missing three.

Another loss to lower-ranked opposition could see the Raiders slide out of the eight when they looked like premiership contenders only a month ago.

For the Dogs, this is a big chance to steal a couple of points and get off the bottom of the ladder.

Dylan Napa is part of the Queensland squad for Origin I, so Ofahiki Ogden starts at lock and Raymond Faitala-Mariner joins the bench. Adam Elliott, Kerrod Holland, Lachlan Lewis and Michael Lichaa are all named in the reserves.

John Bateman is named as a reserve and expected to play, but Josh Hodgson has a busted thumb and Nick Cotric, Josh Papalii and Jack Wighton are all away on Origin duty. Sebastian Kris and Aidan Sezer come into the back half, while Siliva Havili and Corey Horsburgh complete the forward pack.

The Doggies are struggling, but Smith has been a reliable scoring outlet all season. The 22-year-old winger has notched tries in six out of 11 starts in 2019 – an excellent strike rate in an average team.

Like Smith, Oldfield has not let Canberra’s poor form affect his scoring output. The journeyman flanker has found the line three times in four games this season, including two in the Raiders’ hat-trick of defeats.

It is easy to say the Raiders are in a slump, but results alone don’t tell the whole story.

While they were off against the Cowboys last week, Canberra were hardly disgraced in their losses to Souths and Sydney.

Canterbury, meanwhile, have managed three wins all year and were utterly outplayed by Melbourne last time out.

This will test the Raiders’ depth, but the incoming players – especially Sezer – should relish the opportunity.