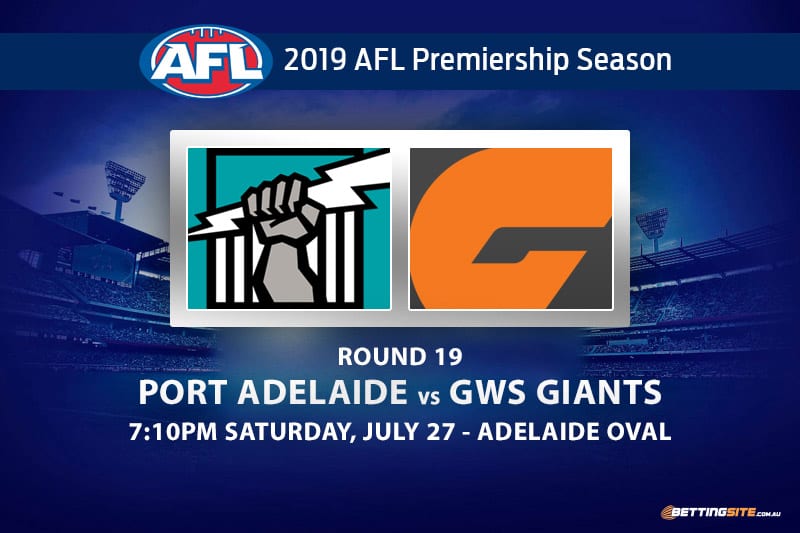 Another Adelaide Oval blockbuster will take place this Saturday night when the Port Adelaide Power host the GWS Giants.

Both teams have suffered a loss of form in the past month, with the Power going down in each of their last two matches.

The Giants, however, ambushed the Magpies last week, coming into quarter time with 50 points already on the board.

If the Power do not bounce back and start winning more matches, their finals aspirations will fade fast.

GWS needs to find a way back into the top four in order to become a true premiership threat, as the likes of Brisbane and Richmond have overtaken them in recent weeks.

Port coach Ken Hinkley has made a pair of big moves at the selection table, dropping Charlie Dixon and Steven Motlop to make room for Paddy Ryder and Joel Garner.

GWS is missing a majority of its first-choice midfield, but the Giants still have plenty of talent on the park with Toby Greene, Tim Taranto, et al.

Robbie Gray to get 25 disposals @ $1.72 with Sportsbet
Gray has a great record of finding the footy against the Giants throughout his career. In his seven matches against GWS, the 31-year-old Port hero has collected over 20 disposals six times and went down injured in the other. Gray will need to play in the midfield this week to get the Power over the line.

Heath Shaw to get 20 disposals @ $1.67
In his 300th career game, Shaw will not go down without a fight. The former Pie is known for taking kick-outs and demanding handballs at all times. With his ability to use the ball well off half-back and his determination to win, Shaw will celebrate his milestone in style.

Zak Butters to kick a goal @ $1.80 with Sportsbet
With Charlie Dixon out of the Power forward line, Butters will have to pull his weight this week. The Western Jets product has booted four goals in his last three games, including two against Richmond last time out, so he is building some consistent form.

Ian Hill to kick two goals @ $3
Hill kicked three goals against the Tigers on his AFL debut, immediately proving his capability at senior level. Although he only slotted one last week against the Magpies, the young West Australian looked very dangerous at ground level. If Hill can rove a few packs well in this match, he should kick a couple of goals.

GWS to lead at every quarter @ $2.88 with Sportsbet
If the Giants can play the same way they did against the Magpies, they will easily beat the Power from start to finish. With Jeremy Cameron up and about, GWS have a dangerous forward half that will overwhelm Port Adelaide’s backline.

With the combination of Toby Greene in the midfield and Jeremy Cameron in the forward line, the Giants will have the firepower to beat Port on their home deck.