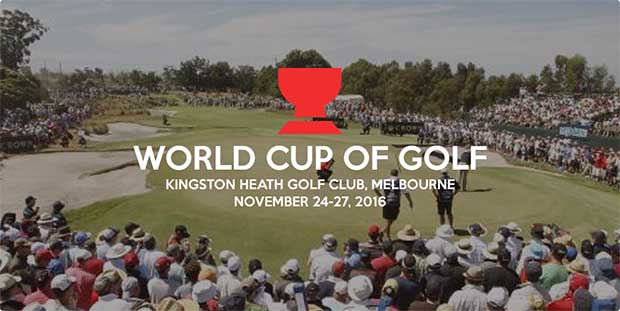 THREE years have passed since the last staging of the World Cup of Golf, which returns this week with Australia hoping to defend the title on home soil.

Adam Scott and Jason Day blitzed the field at Royal Melbourne in 2013, but only one half of that monster pairing will suit up at Kingston Heath.

Day is taking time off to rest and sort out his fitness issues, leaving Warrnambool lad Marc Leishman to step up and fill the void.

CrownBet has the Australians as $6 outright favourites for the 2016 World Cup title, which is somewhat surprising given Scott’s ordinary form at the Australian Open last weekend.

The host nation’s main challengers are the United States and Japan (each $9), both of which have sent strong teams.

Rickie Fowler and Jimmy Walker will be hard to beat, having played together in the USA’s 2016 Ryder Cup victory.

Fowler is sure to draw huge galleries as Melburnians flock to the south-east sandbelt for what is the city’s only top-tier golf event for 2016 after tour organisers decided to shelve the Australian Masters.

Golf’s post-Tiger pinup boy told reporters recently that he was looking forward to tackling his third international team event of the year alongside his good mate Walker.

“Coming off the amazing experience that I had at the Olympics, it’s great to have the chance to put on the red, white and blue again and play for the US in the World Cup of Golf,” Fowler said.

“Jimmy is not only one of my favourite guys out here on tour, but he is clearly one of the most talented players as well. I think we’ll make a fantastic team and our strengths will work well together.

“I’ve heard great things about Kingston Heath and can’t wait to get to Australia.”

With major winners such as Scott and Walker in the mix, Australian golf fans will be treated to the strongest field to grace these shores since the 2011 Presidents Cup at Royal Melbourne.

Only two players currently ranked inside the Official World Golf Ranking’s top 50 featured at the 2016 Australian Open, but that tally rises to 14 this week and includes three from the top 10: Hideki Matsuyama (sixth), Scott (seventh) and Sweden’s Alex Noren (ninth).

Not only does that mean much better viewing than Aussie golf nuts have endured in recent summers, it also makes for some interesting betting opportunities up and down the board.

Australia – Adam Scott’s efforts at Royal Sydney last week were streaky at best, but his form at Kingston Heath is hard to fault. He is a noted admirer of the course – a club member, as well – and should be better for the hit at the Australian Open. He has a very able sidekick in Marc Leishman, a former PGA Tour Rookie of the Year who has finished top five in both the US Masters and the Open Championship.

United States – There may be a few guys ahead of them in the American rankings, but Rickie Fowler and Jimmy Walker make for a cracker pairing. They are both established performers on the PGA Tour and bring invaluable experience from their time together in the US Ryder Cup team. If either of these two plays anywhere near his absolute best, it could well be World Cup title number 25 for the USA.

Japan – The Japanese have claimed the World Cup of Golf twice before, and they have a very good chance to complete the hat-trick here. Hideki Matsuyama is a rising star and one of the biggest threats in the field, while Ryo Ishikawa has two Presidents Cups and a World Cup on his CV – two of which were played at nearby Royal Melbourne.

Sweden – If Henrik Stenson was playing, Sweden might just be the outright favourites for the title. Instead they have Alex Noren, ranked ninth in the world and enjoying some fabulous form; and David Lingmerth, a PGA Tour winner who represented his country at the Rio 2016 Olympics. Noren has won four times in 2016, so the Swedes are a real chance at $13 for the win (CrownBet) and $3 to finish in the top four (William Hill) if Lingmerth can pull his weight.

Ireland – No Rory McIlroy, but Graeme McDowell isn’t a bad compromise. The popular Portrush native has three Ryder Cup victories and a US Open win to his name, not to mention four previous appearances at the World Cup. He will team up with 29-year-old Shane Lowry, who tied for second place behind Dustin Johnson in the 2016 US Open at Oakmont. The Irish are offering good money at $13 to win (CrownBet), $15 to lead after the first round (CrownBet) and $3.25 to make the top four (William Hill).

New Zealand – One of the highlights of the Australian Open this year was a little-known Kiwi by the name of Ryan Fox, who hit the ball a mile and didn’t seem all that fussed about where it ended up. If he can scramble like he did in Sydney, the world number 128 could provide very solid support for NZ top dog Danny Lee. They are $34 outsiders for the title (CrownBet), $6 for a top four finish (William Hill) and $2.25 to crack the top 10 out of 28 teams (William Hill).