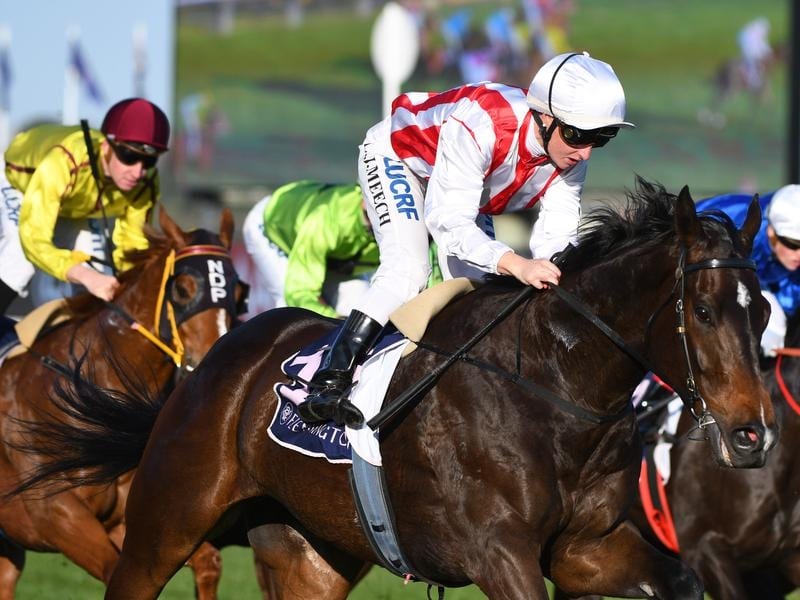 Zoutori will take on G1 company in the Sprint Classic, 7 days after his G2 third at Flemington.

Co-trainer Simon Zahra hopes Zoutori will not strike similar conditions to Derby Day when the sprinter faces his first Group One test in the Darley Sprint Classic.

Zoutori was favourite in last Saturday’s Group Two Linlithgow Stakes (1200m) at Flemington which was run on a soft track and the gelding failed to run up to his short quote ($2.45), finishing third.

The four-year-old was a dominant first-up winner of the Group Two Bobbie Lewis at Flemington before a close third behind multiple Group One winners Sunlight and Santa Ana Lane in the Group Two Gilgai over the 1200m-straight course.

Five-time Group One winner Santa Ana Lane, who has since finished second in The Everest, is the $2.25 favourite to win Saturday’s Darley Sprint Classic (1200m) for the second-straight year while Zoutori is $17.

Zahra, who trains in partnership with Mathew Ellerton, said they did not know what to make of last Saturday’s run but are happy to back Zoutori up after positive signs this week.

“Obviously it was a bit of a head scratcher for everybody,” Zahra said.

“We probably just put it down to the track a little bit.

“There was a lot of surface water and splashing in his face a bit. It looked like he might have just got a bit disinterested but when he got out wide his last bit was strong and not a lot of horses made ground on the day either.

“So we’ll just have a crack and see what happens.

Flemington was rated a Good (4) on Friday with rain forecast.

“I think if the track can be a good four to a five, you’ll probably see the same horse we probably saw a month ago,” Zahra said.

“If at any stage we weren’t happy with him we probably would have scratched him but as the week’s gone on he’s looked progressively better so we’re happy to have a shot at the title.”

Ellerton and Zahra have opted to run Aristia in the Mackinnon rather than the Group Two Matriarch for mares.

“The way she looked on Monday morning it was a bit of a no-brainer,” Zahra said.

“She looked absolutely awesome. She’s dappled up and has really come on from that.

“She’s a Group One winner already. This is obviously her biggest task at weight-for-age but if she can run first three or four we’ll be pretty happy.”