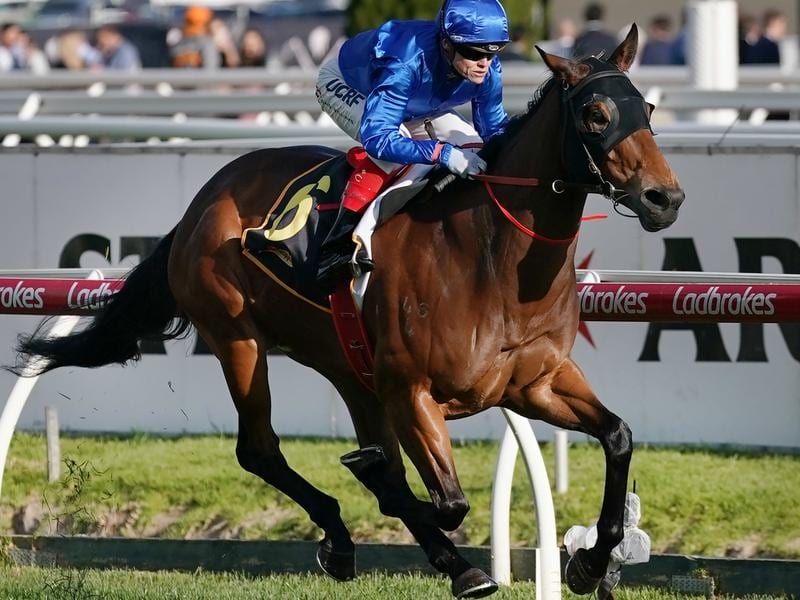 Savatiano has claimed some major scalps to deliver Godolphin another stakes win at Caulfield.

Accomplished jockey Mark Zahra was thankful he received a last-minute call up from Godolphin to ride for them at Caulfield as they combined for successive feature wins with Viridine in the Regal Roller Stakes and Savatiano in the P B Lawrence Stakes.

Zahra said before the call came from Godolphin, he had a light book of rides with nothing that jumped off the page so he was thrilled to have been given the opportunities.

“I think it was Wednesday morning when I got the late call-up and I’m very thankful for it with two horses that were fit and ready to go in nice races,” Zahra said.

On both occasions, Zahra positioned each horse ideally, but then had to use his strength to get them home.

Both won only narrowly with Viridine claiming the Listed Regal Roller Stakes (1100m) by a half-head and Savatiano the Group Two P B Lawrence Stakes (1400m) by a head.

Zahra said he watched Savatiano’s recent trial win in Sydney and felt she cruised home with James McDonald aboard.

“When I drew well it was just going to be a matter of getting luck at the right time and it panned out perfect,” Zahra said.

Zahra said with 300m to go he was confident she would win and cruise past the runner-up Sircconi but he was surprised at how strongly that horse fought back.

“I just had to give her a bit of a shake up. I always thought I was going to get there but it was harder than I thought,” he said.

Godolphin’s Melbourne stable foreman Sean Keogh said James Cummings wanted to replicate Savatiano’s preparation at the start of the year when she won the Millie Fox Stakes first-up at Rosehill.

“She came into this preparation similar to the way she entered the autumn,” Keogh said.

“We saw that pattern play out really well when she won the Millie Fox and showed herself to be a top flight racemare and the same recipe worked for us today.”

In-form galloper Viridine defied a betting drift when he was able to carry 62 kilos and grab Age Of Chivalry to win the Regal Roller Stakes.

Keogh said it was a game effort by the horse to carry the big weight and win.