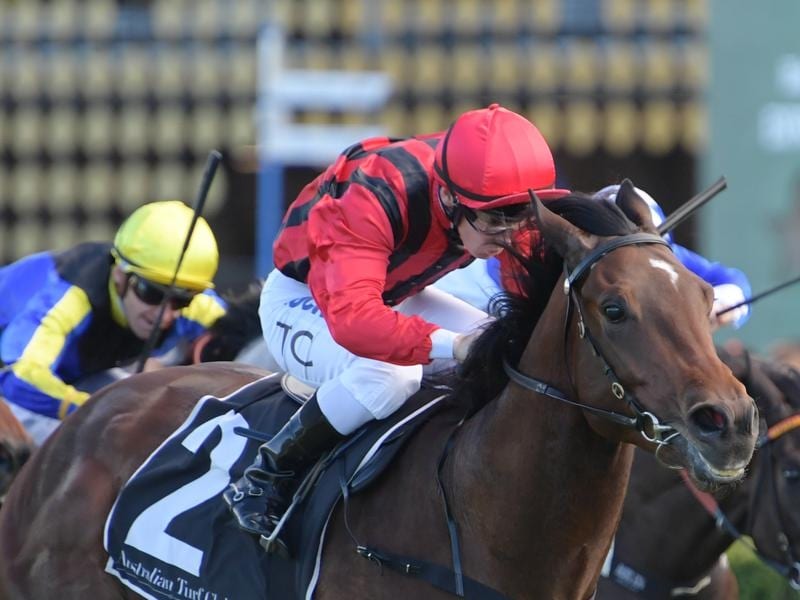 Jockey Tim Clark was able to secure an uncontested lead on Rule The World.

Tulloch Lodge will look to the spring with Rule The World after the two-year-old made it two victories from as many starts with an all-the-way opening race win at Randwick.

Jockey Tim Clark was able to get an uncontested lead on the youngster and Rule The World kicked strongly in the straight, holding on to beat fast-finishing Betcha Flying in Saturday’s Australian Turf Club Handicap (1300m), with Roman Wolf third.

Adrian Bott, who trains in partnership with Gai Waterhouse, said the stable had a good opinion of Rule The World and felt he had plenty of scope for improvement.

“There’s a lot of upside with him going forward,” Bott said.

“He’s very professional, very laid back and was very tractable for Tim.

“He was able to use his tactical speed, control the race from there and he quickened at the right time and he fought it out toughly.”

Bott hopes Rule The World’s two-start winter campaign will give the Gooree Stud-owned gelding a good foundation to progress to bigger targets in the spring.

The horse is likely to be given a short break before being prepared for stakes races.

“We wanted to come here today just to give him that little bit more experience and get his prize money rating up for some of the better races in the spring,” Bott said.

“We’ll most likely look to give him a little let-up now and, as I said, there’s a couple of nice targets there we’d like to pick off.”

Clark made it an early double aboard the Peter Ball-trained San Marco in the TAB Highway Handicap (1000m), hooking the four-year-old towards the outside fence in the straight in what proved a winning move.