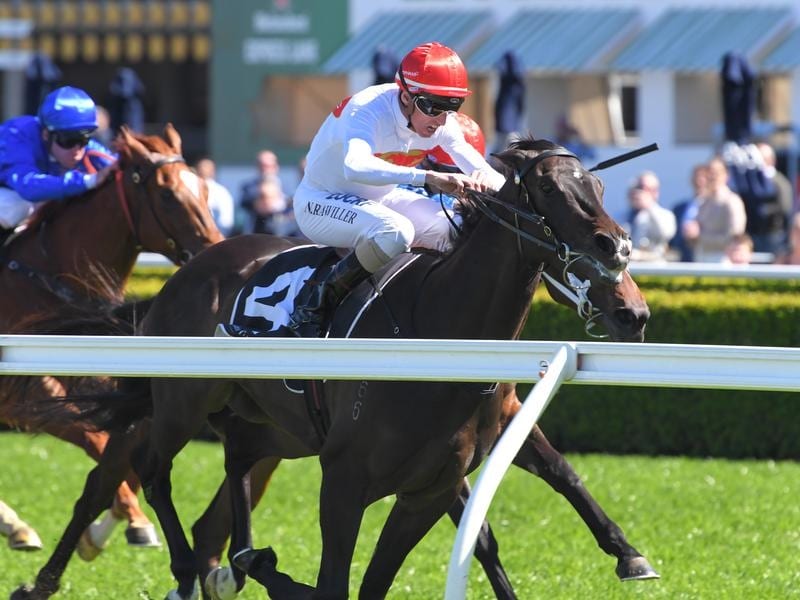 Yao Dash (red/white) is likely to take his place in the $1 million G1 Golden Rose at Rosehill.

The lightly raced Yao Dash, the only horse to beat Funstar, is now set to take his place in the Group One Golden Rose.

The Gai Waterhouse and Adrian Bott-trained three-year-old won his midweek debut at Canterbury last month and backed it up with victory at Rosehill on September 7 when he held off Funstar by half a length in a 1300m-race.

The Chris Waller-trained Funstar came out on top at her fourth start in a three-way tussle with Probabeel and Libertini in Saturday’s Tea Rose Stakes to assert her authority on the Group One Flight Stakes on October 5.

While connections were originally planning to bypass the Golden Rose (1400m) with Yao Dash, Dynamic Syndications boss Dean Watt said his trackwork last week had prompted a change of heart.

Watt said a final decision whether Yao Dash ran in Saturday’s 1400m-feature would be made after trackwork on Tuesday.

“It all depends upon how Yao Dash continues handling the pressure in what is his first racing preparation,” Watt said.

“A final decision on a jockey and whether we accept with Yao Dash in the Golden Rose will be delayed until after his final trackwork gallop on Tuesday morning.

“It is now more likely than not, Yao Dash would be accepted into the Golden Rose.”

Yao Dash is on the third line of Golden Rose betting at $9 alongside Kubrick.

Bivouac and Exceedance are the $3.50 equal favourites with Yes Yes Yes next at $4.50.

Nash Rawiller had already accepted the ride on Yes Yes Yes when he thought Yao Dash would be going to the Stan Fox Stakes.

Libertini’s trainer Anthony Cummings will make a decision during the week whether the filly heads to that race but says it is unlikely.

“I just think the other two are going to be much better at the mile than what Libertini is going to be,” he said.

Funstar is a half sister by 2014 Cox Plate winner Adelaide to 2018 Queensland Oaks winner Youngstar.