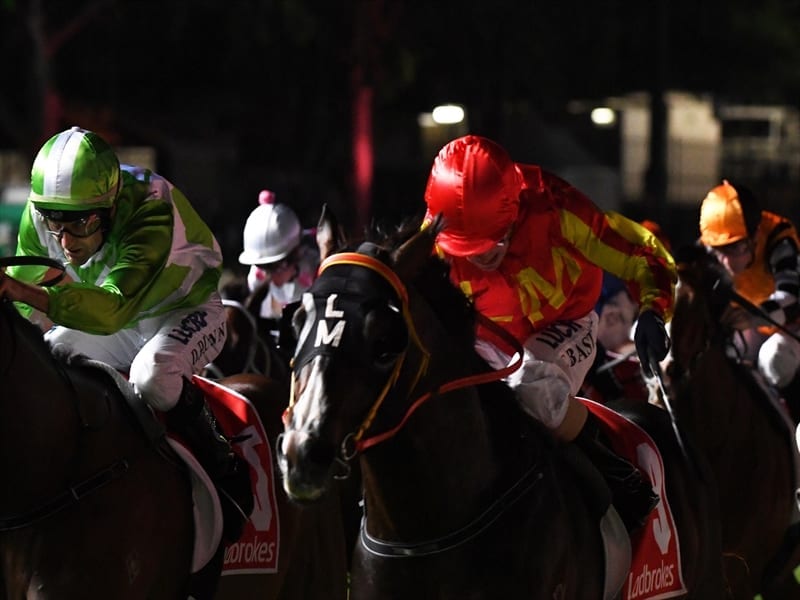 Written Choice (red) has led all the way in fast time in the 55 second challenge at the Valley.

Written Choice has posted a time that could prove hard to topple in the Moonee Valley 55 second Challenge.

The Logan McGill-trained sprinter posted a time of 54.77 secs in claiming the third heat of the challenge on Friday night.

The time was 0.08 secs outside the course record held by Vatican.

The 55 second Challenge is a series of 17 races conducted at each of the Friday night meetings held at Moonee Valley during the season with the trainer of the fastest horse collecting a $55,000 cash prize.

Written Choice won the second heat of the challenge on October 5 and held off the first heat winner Essence Of Terror in a head-and-head battle to the finish on Friday.

McGill, who rides the horse in the majority of his trackwork, said the four-year-old was quite temperamental and had dislodged the trainer on a number of occasions.

But he is also one of the stable favourites.

“It’s a great thrill to win with this horse,” McGill said.

“We’ve had him since he was a baby and have always liked him.

“He showed that when he won his first start at Sandown but we’ve been patient with him and not jumped him up in grade too quickly.

“But we’ll raise the bar now. The next step now is to find a suitable stakes races.”