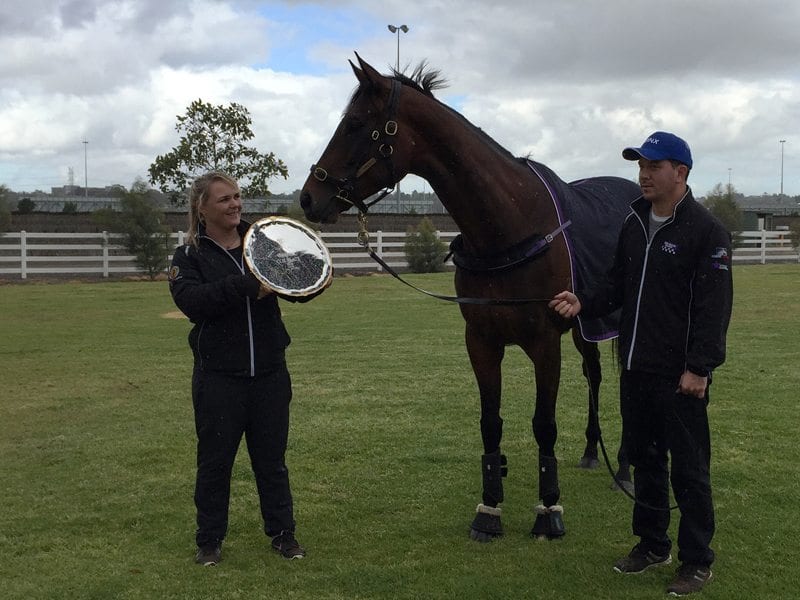 Champion mare Winx is in great order the day after her second consecutive Cox Plate win.

Winx is the Usain Bolt of Australian horse racing.

The mare turned an expected showdown with Hartnell in Australia’s greatest weight-for-age race into a one-horse show, beating the top gelding by a record eight lengths in her second consecutive Cox Plate victory.

The Chris Waller-trained mare was in great order the morning after her 13th win in a row.

“She was still asleep when we walked into the stable this morning at 5.30. I guess she definitely deserved it after that mighty effort,” Waller’s Melbourne foreperson Johanne Taylor said on Sunday.

“Once we brought her out of the box she was on her toes and just a happy mare.”

To describe her as the Usain Bolt of horse racing is fitting, Taylor agreed.

“At this stage there’s nobody that’s really matching her over that particular distance in Australia.

“As with Usain Bolt, nobody’s really challenging him, such as we saw at the Olympics again this year.”

Like Bolt, who secured a sweep of sprint titles for the third successive Games, Winx is simply too good for the competition.

And like Bolt, who will be trackside at Flemington for Oaks Day on November 3, Winx is also ultra-competitive.

“When she goes out there even for her trackwork, you can just see that when there’s another horse five or six lengths in front of her just cantering she actually wants to get on the bridle and make sure she gets past it,” Taylor said.

“Once she’s past the horse she just floats around again. She just loves competition.”

Her cruising speed is some horses’ top speed, Taylor said.

“Even though she has that high cruising speed she’s got a real good turn of foot and she can sprint and it’s a sprint she can sustain.

“Some horses only have a sprint for a couple of hundred metres or so or they only have one extra gear to give whereas there just doesn’t seem to be a bottom to her. The more you ask of her the more she obliges.”

So can the champion race even better?

“It’s a little bit crazy to say yes because you think of what she did yesterday, it’s not something that you could script,” Taylor said.

“You know you went there with a horse in peak form and we had a quality horse and that she certainly had the measure of the other runners. But what she did was just amazing.

“If she could get better well I think then we’re certainly in for some show aren’t we.”