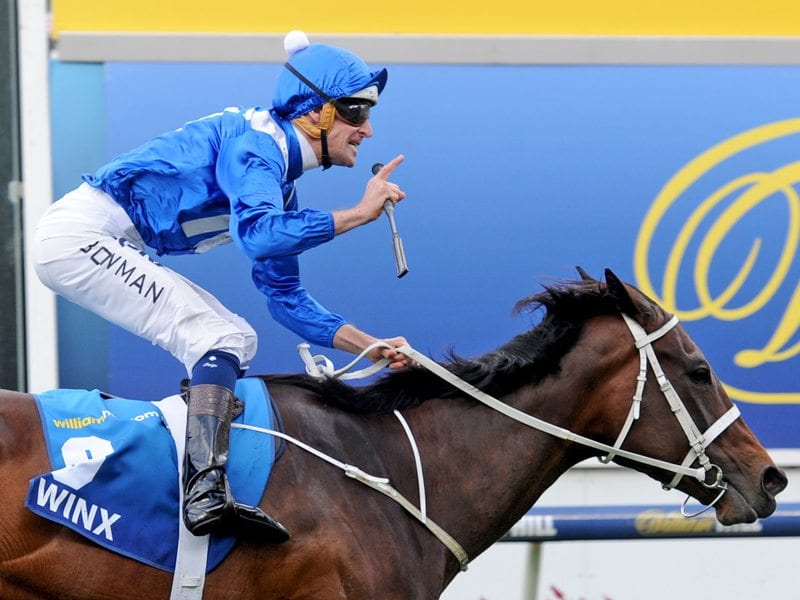 Billed as a two-horse race, the Cox Plate has turned out to be about just one – Winx.

Billed as a two-horse race, the Cox Plate has turned out to be about just one – Winx.

The defending titleholder in Saturday’s weight-for-age championship at Moonee Valley was expected to face a serious challenge from Hartnell with the race billed as a repeat of the Bonecrusher-Our Waverley Star duel 30 years ago.

Hugh Bowman and Winx were having none of any kind of match-race with her jockey urging her to the front rounding the home turn.

The distance between Bonecrusher and Our Waverley Star was a neck.

Between Winx and Hartnell the gap was a Cox Plate record eight lengths.

While her trainer Chris Waller has said all week Winx was ready and absorbed the pressure, it was clear it was more than he thought as he struggled with his emotions.

“I stupidly got involved in all the build-up,” Waller said.

“This has been 365 days in the making. Her whole year has been geared towards this and she has done what Sunline did.”

Sunline won back-to-back Cox Plates in 1999 and 2000 and also travelled to Hong Kong to win the Mile on International day.

Royal Ascot scouts have been courting Winx for next year’s June meeting and Waller said it was an option – or maybe not.

“She is certainly adaptable enough to go over there,” he said.

“Or maybe they should come to us.”

Hartnell’s trainer John O’Shea struggled to speak, mostly from a serious chest infection and partly from awe as he shook his head.

“This is her home ground and fair play to her.

“We’re very proud of him. James (McDonald) said he was at no stage happy turning the whole time. We’ve got to go back to a big track.”

Rosehill in fact is Winx’s home track but in two visits to Moonee Valley, she has treated it as if she has been there all her life.

“She had her first start less than a year ago. I couldn’t be any prouder of her,” trainer David Vandyke said.

“It was an amazing performance and just amazing to be here today.”

French visitor Vadamos had a patchy race, leading when expected pacesetter Awesome Rock struggled in the soft ground, then finding it hard to keep up around the home turn.

He finished fourth, 9-3/4 lengths from Winx with Awesome Rock behind him.

A year ago, Waller wasn’t prepared to call Winx a champion. On Saturday he was wondering what she could possibly do next.