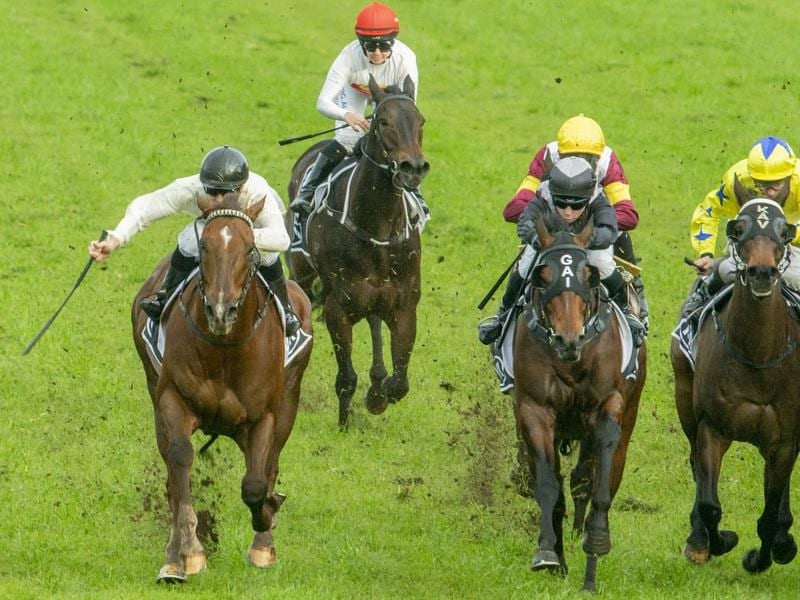 Noble Boy (left) has rediscovered winning ways for a new stable in claiming the Winter Stakes.

They are partners away from the track, but trainer Clare Cunningham and jockey Jason Collett are proving an equally formidable team on it.

The pair combined to win Saturday’s Listed Winter Stakes (1400m) at Rosehill with Noble Boy, their second black-type victory together this year after capturing the Carrington Stakes courtesy of Cradle Mountain in January.

But it could have been a very different story had Noble Boy not been made an emergency in Melbourne last weekend.

Racing NSW shut the gates on horses travelling from Victoria this week due to the worsening coronavirus situation in the southern state, which might have left Noble Boy stranded had he raced.

“I was trying to find races in other locations but thank God we didn’t go to Melbourne last weekend, we didn’t get a run until race day,” Cunningham said.

“It just shows you, you do the right thing and you get rewarded.”

The 2019 Country Championship winner, Noble Boy is in his first campaign for Cunningham after being controversially moved from trainer Todd Blowes.

Cunningham has distanced herself from those dramas and focused solely on learning about the horse.

“It was a bit messy with the old ownership and trainership group. I said I didn’t want anything to do with that,” Cunningham said.

“The owners have been really good to me and supported us the whole preparation.”

Noble Boy ($4.60) had been building towards a win and given a patient ride by Collett, the five-year-old surged through towards the inside to score a narrow but comfortable victory.

He had a neck to spare over leader Taikomochi ($41) with Order Again ($5.50) warming up late for third another half-neck away.

Noble Boy gave Collett a treble after earlier wins aboard Rothenburg and Varda and Cunningham admitted she was worried he had used up his luck.

“I thought, bugger you, you’ve lost all the luck again today,” Cunningham said.

“He is in great form and he rides this horse very well so I’m glad to have him on board.”

Thrilled to deliver his partner a stakes win, Collett said Noble Boy had been somewhat of a project as the team got to know the horse and his nuances.

“We have just learnt about him every day,” Collett said.

Civic Stakes winner Trumbull started favourite but reverted to his habit of dwelling at the start and failed to show his customary turn of foot, finishing midfield.

Collett shared riding honours at the meeting with Nash Rawiller who also celebrated a treble via Korcho, Lewis and Inanup.