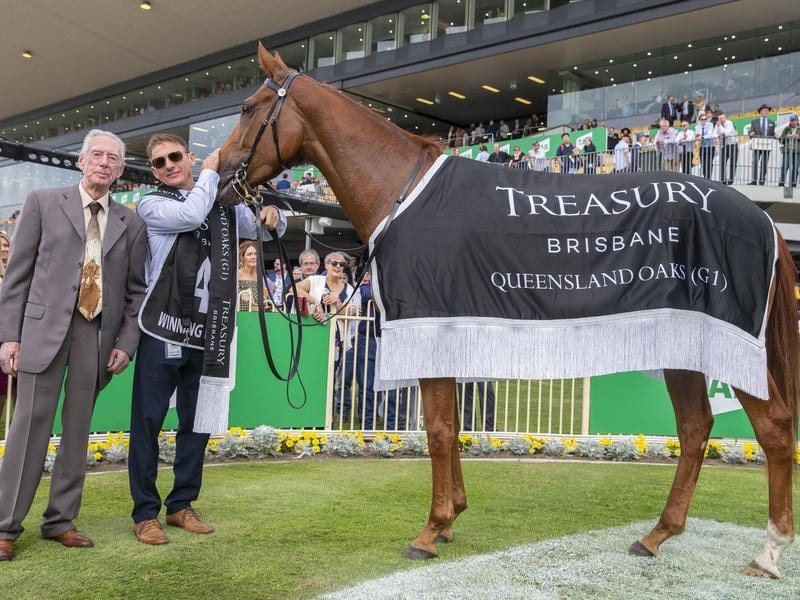 Qld Oaks winner Winning Ways is back with trainer Garry Newham (l) to be prepared for the spring.

Queensland Oaks winner Winning Ways has returned to trainer Garry Newham’s stable but her spring campaign will not be confirmed until she has completed a three-month ban for a minor bleeding attack.

The now four-year-old mare will be entered for the Group One Caulfield Cup and Group One Cox Plate in the spring with her campaign to be finalised next month.

Winning Ways is favourite to win a multitude of awards at the annual Racing Queensland Awards next month including Horse Of The Year.

The filly won the Group One Queensland Oaks and the Group Three Gold Coast Bracelet to carry the state’s flag during the recent carnival.

Unfortunately, Winning Ways bled after the Oaks win on June 1 and incurred a mandatory three-month ban from racing.

Newham said it was a very small bleed and the mare had never shown any signs of bleeding before.

“She has had a good spell and is back pottering around the stables. The ban is over on September 1 so we can get serious after that,” Newham said.

“Winning Ways will be entered for the big spring races such as the Caulfield Cup and Cox Plate but I am not getting too far ahead just yet.

“She has let down well and looks great.”

Newham said while the mare was a Magic Millions buy she was not paid up for the series.

“It is a pity because the Magic Millions Cup would have been a nice race for her,” he said.

Winning Ways was raced by Newham’s long-time client Paul Makin who died the week of the Oaks.

“Paul’s horses are now raced by his family but as they gradually go they won’t be replaced. So whether it takes one year or five that will be it,” Newham said.