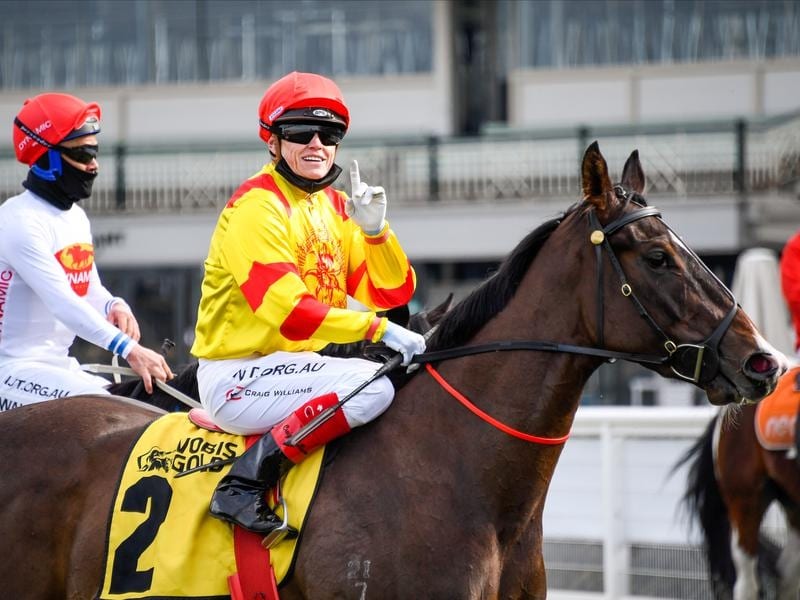 Melbourne Cup-winning hoop Craig Williams will ride for the first time this season at Caulfield.

In the lead-up to his return to riding at Caulfield, champion jockey Craig Williams has been reacquainting himself with some of his prospective spring stars.

Williams has enjoyed an annual freshen up, although the first part of his three-week break included a suspension.

He returns to the saddle at Caulfield on Saturday when he will be trying to win his second Group Two P B Lawrence Stakes (1400m) after landing his first aboard Hartnell in 2017.

Williams will ride Morrissy, who he was successful aboard over the same track and distance when he last rode on July 25.

The Leon and Troy Corstens-trained galloper is rising in class but Williams says he will have a fitness advantage over many of his rivals.

“He’s well set up for a race like this. He’s racing well and he should be ultra competitive,” Williams said.

A frontrunner, Morrissy takes on a field which includes seven Group One winners headed by Mystic Journey, Arcadia Queen, Regal Power and Streets Of Avalon.

On Monday, Williams had nine rides at the Flemington jump outs, headlined by Melbourne Cup winner Vow And Declare who finished second in his heat.

On Tuesday, he rode Loving Gaby in trackwork at Caulfield and later in the day it was announced he would partner Surprise Baby when he returns in the Feehan Stakes.

“I’ve got to say the horse I’m most excited about riding going into the spring is Loving Gaby,” Williams said.

“She’s quite relaxed and she looks bigger and stronger. We know what she can do and if she’s come on physically and mentally, which I think she has, she’s going to be a really exciting sprinter.

“Vow And Declare looked good and felt happy. He’s in a good spot.”

“I love the competition each season with ‘Ollie’. We’ve now won 19 between us, which is a lot for two people riding at the same time against each other,” Williams said.

“Winning the championship was a big thrill.

“People comment there’s no money in the championship but it’s so much more than that with the prestige which accompanies it.”