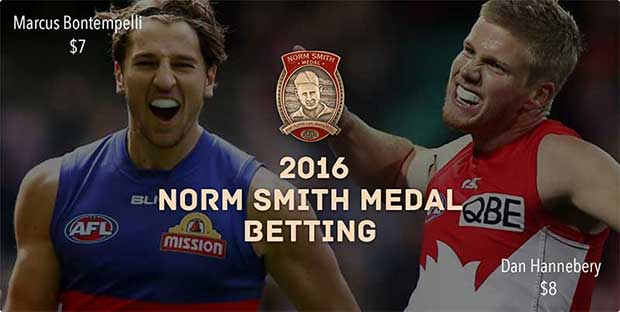 FEW football betting markets draw as much action as the Norm Smith Medal, awarded each year to the player named best afield in the AFL Grand Final.

Many consider this a higher individual achievement than even the Brownlow – a view backed by an honour roll that includes all-time greats such as Gary Ablett Sr, Kevin Bartlett, Nathan Buckley, James Hird, Greg Williams, and two-time winners Gary Ayres, Luke Hodge and Andrew McLeod.

But the beauty of picking the best player on the day is that it isn’t always the superstars that shine brightest.

Names like Paul Dear, Billy Duckworth and Brian Lake may never have featured prominently in the Brownlow count, but they are all Norm Smith Medal winners – and at very long odds.

Last year it was Cyril Rioli, who steered Hawthorn to a third consecutive flag with one of the most effective 18-disposal performances in living memory.

Which Sydney Swan or Western Bulldog will win it this time around?

Marcus Bontempelli ($7) – It is often said that the true sporting greats deal in moments rather than numbers. If that is the case, Bontempelli’s performances throughout the AFL finals series suggest a legend in the making. Even when he isn’t having the greatest day, as per the prelim against GWS Giants, the young Dog finds a way to impose himself on the contest and deliver the most telling of blows. That kind of class under pressure is what wins Premierships.

Josh Kennedy ($8) – The Swans have a trio of midfield guns in single-figure odds, but it is hard to look past the 28-year-old veteran of the crop. Kennedy has bounced back from some indifferent form early in the year to stake his claim as Sydney’s number one ball-winner, and his immense 42-disposal outing against Adelaide stands out as perhaps the best individual display of the finals thus far. He’ll be a shoo-in if he plays half as well as that this Saturday.

Lance Franklin ($9) – Buddy showed in the prelim win over Geelong that he doesn’t need to kick bags of goals to have an enormous impact. His oft-underrated field kicking skills were on full display that night, especially going inside 50. Whether he plays deep or roams up the ground this weekend remains to be seen, but whomever gets the Franklin job – probably a combo of Dale Morris and Joel Hamling – will have to do more than simply stifle his scoring opportunities.

Luke Dahlhaus ($16) – The Dogs have had a number of key figures return from injury in the back half of the season, but Dahlhaus has made as big a difference as anyone. He is versatile, he is quick, he is aggressive and he loves a goal. Despite his mere 24 years of age and 90-odd games of senior footy, he is also one of the most experienced campaigners in a baby-faced Bulldogs midfield and has already shown plenty throughout the finals.

Liam Picken ($23) – It is no fluke that Picken is the Bulldogs’ top vote-getter in the inaugural Gary Ayres Medal poll for the best player of the finals series. A relative relic at the ripe old age of 30, the former specialist stopper has blossomed into one of the most capable and adaptable midfielders in the competition over the past two years. He can tag just about anyone, he can win a ton of hard ball if required and he doesn’t mind a run down the wing either. The Swans’ midfield riches might see Picken start in a defensive role, but he is well worth a dip at $23.

Dane Rampe ($23) – In the space of half a season, Rampe has evolved from a solid young defender into one of the most valuable assets in the Sydney back line. His All Australian selection was well deserved, and his performances throughout the finals thus far have earned him nine votes for the Gary Ayres Medal. His 26 touches and 11 marks against the Cats epitomise an all-round modern defender who is more than capable of holding the Norm Smith judges’ attention.

Gary Rohan ($34) – It has been a frustrating stop-start career for Sydney’s speedy half-forward, and it looked like his season was over when he went down in the semifinal win over Adelaide. But Rohan pulled off a remarkable recovery to suit up for the prelims, where he contributed a brace of goals from 18 touches and six marks. Rohan, like Cyril Rioli, is one of those players who doesn’t need a heap of the ball to have a huge impact, and his eye-catching, line-breaking style makes him a good outside chance.

Caleb Daniel ($34) – Who doesn’t love the Bulldogs’ tiny midfield marvel? Since his AFL debut midway through last season, Daniel has made an absolute mockery of the modern-day obsession with size and strength. He started nervously against the Giants, but his second half showed all the skill, poise and desire that earned him runner-up in the 2016 NAB Rising Star. His helmeted scone makes him impossible to miss – always a good trait in this kind of market.

Australia’s best bookmakers are running a heap of betting specials for the 2016 AFL Grand Final, including dozens of double bets, player props and footy exotics for the Norm Smith Medal. Here are our picks for a few of the best value markets on offer.

Luke Dahlhaus over Heeney, Macrae and Mitchell – $5.25 at CrownBet