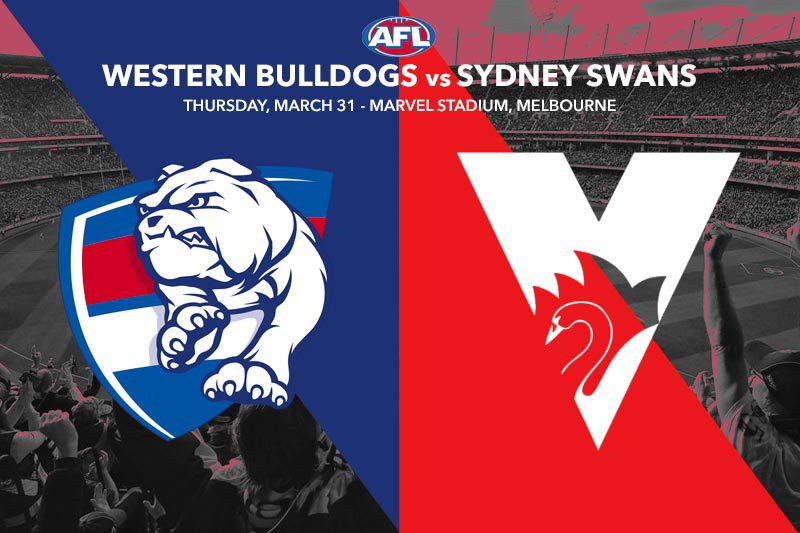 You know it is going to be an exciting AFL contest when the Western Bulldogs and Sydney Swans go head-to-head, and this Thursday night’s battle at Marvel Stadium should be a ripper.

The Swans have gotten off to a red-hot start in the first two rounds, beating both the GWS Giants and the Geelong Cats with relative ease.

Life has not been as easy for the Bulldogs to start this 2022 AFL season, as they currently sit 13th on the ladder after losing their opening two matches.

All eyes were on Lance Franklin last week as he slotted his 1,000th career goal, but there are whispers saying the superstar forward will be rested this week.

Aaron Naughton has been electric for the Doggies up forward so far this season, but is racing the clock to prove his fitness after suffering a corked calf against the Blues last week.

The Swans have ruled out a return from their All-Australian forward Tom Papley, as his hamstring strain has taken slightly longer than expected to heal.

John Longmire has once again formulated a high-scoring offensive unit at Sydney this season, but will his fast-paced brand stack up against the handball-happy Western Bulldogs?

Jack Macrae, Marcus Bontempelli, Josh Dunkley and the returning Bailey Smith should make life difficult for the Swans out of the middle, but they will not be deterred since they love to attack from the back half of the ground.

Jake Lloyd made an immediate difference to the Swans’ backline upon his return in round two, collecting 27 disposals off half-back in a top-notch performance.

Isaac Heeney and Adam Treloar may not be the same type of player in terms of athleticism or game-style, but they both act as major barometers for their teams. You can normally back in each side to get a win when these champions are on-song, which has been the case so far this year.

Treloar has been terrific so far in 2022, although his individual success is not translating into team success. Heeney kicked five goals last weekend and three the week prior, willing his team to victory in both contests. Both players are worth a look in the disposal and goalscorer markets at BetOnline.

The Bulldogs will start as favourites for this contest due to their home field advantage at Marvel Stadium, but we think the 2-0 Swans are the team to beat. Adding the explosive Chad Warner to the mix in the midfield gives them more speed in the engine room, which could be exactly what they need to beat the outstanding Bulldogs midfield brigade. The Swans won the last clash with the Dogs at Marvel and will be a huge chance this Thursday night.

Jake Lloyd is the designated kick-out from full-back for the Swans, which gives the defender an extra touch for every opposition behind. Lloyd managed over 30 disposals in his last two full-length contests against the Dogs, and he is an excellent chance to produce something similar this week.

Take the Swans to win this week and advance to 3-0, with Isaac Heeney starring again and kicking at least a couple of goals. Lloyd will rack up plenty of disposals in the backline and help the Swans transition the ball against the out-of-form Bulldogs.