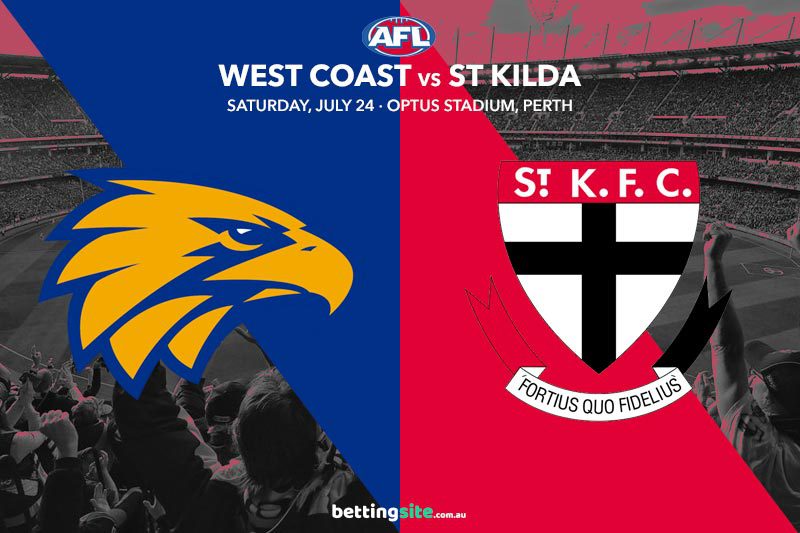 With just five rounds remaining in the 2021 AFL Premiership season, the West Coast Eagles will host the St Kilda Saints at Optus Stadium this Saturday in a crucial clash for both sides.

Both the Eagles and Saints are fighting for a spot in the finals, with West Coast sitting seventh on 36 points and St Kilda in 11th on 32 points.

A loss for the Saints this Saturday will make it very hard for them to finish inside the top eight, as their poor percentage of 86.6 puts them well behind eighth-placed Essendon (104.5).

The Eagles expect Josh Kennedy to pass fit for this important match, while Luke Shuey could miss after he was subbed out with a calf issue against the Crows.

The biggest issue for the Saints will be whether they can replace Rowan Marshall, as their record stands at just 2-6 without the ruckman. The Eagles are known for stretching opposition teams with their height, which means they can capitalise on the Saints’ relative lack of tall timber.

The loss of both Dan McKenzie and Tom Highmore is horrible timing for the Saints defence, as Jamie Cripps and Liam Ryan are both in excellent form heading into this contest. Ryan has kicked a goal in all three of his encounters with the Saints, and we think he can slot a couple of majors this week at $2 with Sportsbet.

These two players can tear teams apart in multiple ways out of the centre, and both were on song when the Saints toppled the Eagles back in round four. Tim Kelly topped the Eagles’ disposal tally that day with 23, while Zak Jones was a big factor in St Kilda’s come-from-behind win with 26 touches. If gets off the chain and the other does not, that could decide this contest.

Although the Saints won against the Eagles back in round four, we do not think they can pull off another upset here. Nic Naitanui will capitalise on the absence of Rowan Marshall, giving his side a big advantage in the middle. West Coast has won its last six home matches against the Saints and should cover the line this Saturday.

Zak Jones to get 25+ disposals

Zak Jones has been very inconsistent for the Saints this season, but he is a damaging midfielder when in full flight. The former Swan racked up 26 touches against the Eagles earlier in the season, while he also posted consecutive games of 30+ disposals in rounds seven and eight before a lengthy spell out injured. Given those numbers, the $2.10 for Jones to get 25 or more touches this weekend looks overs.

We think the Eagles will steady the ship against the Saints this weekend with a solid victory. Liam Ryan will kick a pair of goals to help West Coast cover the line, while Zak Jones could have a big impact in the middle for St Kilda. These three legs combined will net you an $8.25 return at Sportsbet.