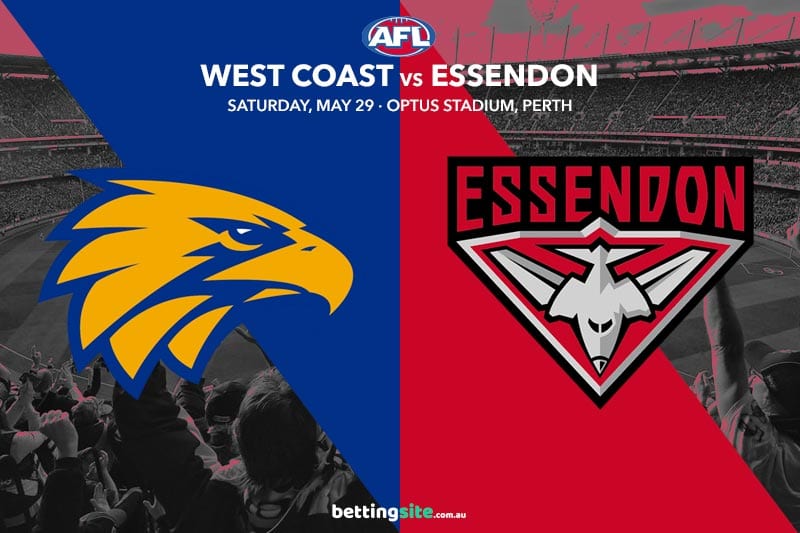 The Essendon Bombers will make the tough trip to Optus Stadium to face the West Coast Eagles on Saturday night in Round 11 of the 2021 AFL season.

Both the Eagles and the Bombers have won three of their last five contests heading into this clash, but the home-state advantage has online bookmakers siding with West Coast.

The Bombers were forced to fly out of Melbourne earlier than expected due to a COVID scare in Victoria, allowing them more time to settle into Perth.

Jake Stringer and Sam Draper are potential inclusions for the Dons, while the Eagles are not rushing the return of Elliot Yeo after 10 months on the injury list.

Optus Stadium has provided the Eagles with a massive advantage this season, as their passionate fans have cheered the home side to five wins from five matches in 2021. The Bombers have not won an interstate game yet this season, going down in all four of their road trips.

The Eagles have totalled over 100 points in each of their last four home matches, as their potent forward line has a terrific understanding of the ground. Any forward wearing a West Coast guernsey could shine on the day, not just their elite tall targets.

Dom Sheed and Zach Merrett were highly rated midfielders in the 2013 AFL national draft, and they have both grown into stars of the competition. Sheed averages over 25 disposals per game in the talented Eagles midfield, while Zach Merrett is enjoying another year collecting over 30 disposals per week. Merrett has accumulated 30 or more disposals in four of his last five outings against the Eagles, so look for him to thrive this weekend.

Although the Bombers are winless on the road and the Eagles are near-impossible to beat in the west, we think the final margin will stay within the 1-39 range. The Dons lost away to the Swans by just three points and the Giants by only two, so they are not useless outside of Victoria. Adam Simpson’s men will get the victory, but it will not be a blowout.

A wet weekend is forecasted in Perth, so we are looking beyond the key forwards in the goalkicking markets. Jamie Cripps is not the flashiest player, but the small forward gets the job done most weeks. Cripps has kicked eight majors in his last three contests against the Bombers, including his impressive 4.3 in the 2019 elimination final.

Jamie Cripps and Zach Merrett have priors in this matchup, so we are taking them both in our multi this week. The Eagles will keep their unbeaten home record alive, while the Bombers will notch up another honourable loss on the road.