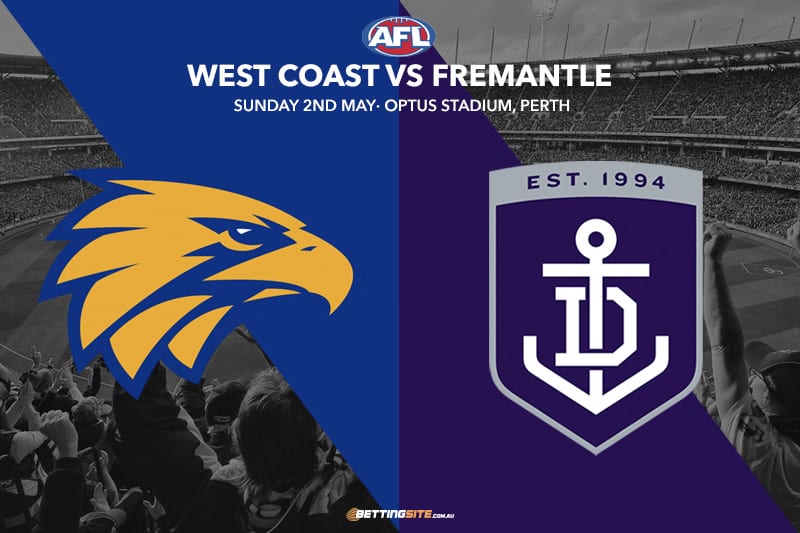 The Western Derby is the showpiece match on Sunday afternoon when West Coast play Fremantle at a 75% full Optus Stadium.

Adam Simpson and the Eagles return to Perth with their tail between their legs following a 97 point defeat at the hands of Geelong last weekend, and will be looking to make it 11 derby wins in a row against their rivals.

Fremantle have been going about their business quietly led by a resurgent David Mundy and Nat Fyfe, whilst being aptly supported by their young crop of up and coming guns.

Online bookmakers have West Coast priced as $1.87 favourites for the 52nd Western Derby, whilst Fremantle in head-to-head markets present some value at $2.05.

The 52nd Western Derby is the perfect way for Round 7 to end with both teams coming to the match with a bit to prove. The Eagles will be hoping their performance against Geelong was just a blip on the radar, whilst Fremantle will be wanting to show they are no joke and are genuine top eight contenders with a win over their cross-town rivals.

West Coast had plenty of star players ruled out through injury against Geelong, namely the likes of Shannon Hurn, Luke Shuey, Elliot Yeo, Josh Kennedy and Liam Ryan. On Sunday they regain Josh Kennedy from his ankle injury, but in the process will be without Jeremy McGovern (groin)

On the other hand, Fremantle will be without their All-Australian defender Luke Ryan (calf) and despite his effective ball-use coming out of the back half, he would have been pencilled in to play on either Jack Darling or Josh Kennedy in West Coast’s potent forward line.

Both Dom Sheed and Andrew Brayshaw are arguably the barometer for how their respective sides play. Sheed is coming off his lowest haul of disposals since Round 2, 2020 after collecting just 13 touches at the Cattery. Brayshaw on the flipside was crucial in Fremantle’s big win over North Melbourne last weekend when racking up 31 touches of his own from just 73% time on ground. Out of the two midfielders, whoever has the stronger impact on the game, it would be their team that you would expect to come out on top.

Many may think that West Coast’s performance against Geelong was a one off performance, but with six of their top 10 players missing from their lineup on Sunday they could be vulnerable. Fremantle have been flying under the radar throughout the year and with the likes of Mundy, Brayshaw and Matt Taberner in career-best form then the Dockers look set to snap a 10 game losing streak. It is the first time since 2015 that the Dockers meet the Eagles where they are higher on the ladder, and we expect Freo to continue their strong form on Saturday afternoon.

The Fremantle veteran David Mundy is coming off 30 touches and three goals against North Melbourne and is remarkably in career-best form. The former Dockers captain will look to help snap his side’s ten game losing streak against West Coast with a best on ground performance. With no known taggers in West Coast’s lineup, Mundy may just get his own way on Sunday afternoon and we are expecting him to cross the 30 disposal mark for the third time this year.

Long gone are the days of Fremantle being a dour defensive side and West Coast being the bullies of the Western Derby. Fremantle’s form over the first six weeks have been the superior of the two Western Australian sides, and with the Eagles being without key cogs to their lineup and coming off a poor performance they look ripe for the taking. Expect David Mundy to lead Fremantle to a win against their rivals for the first time since 2015 in a high scoring affair.