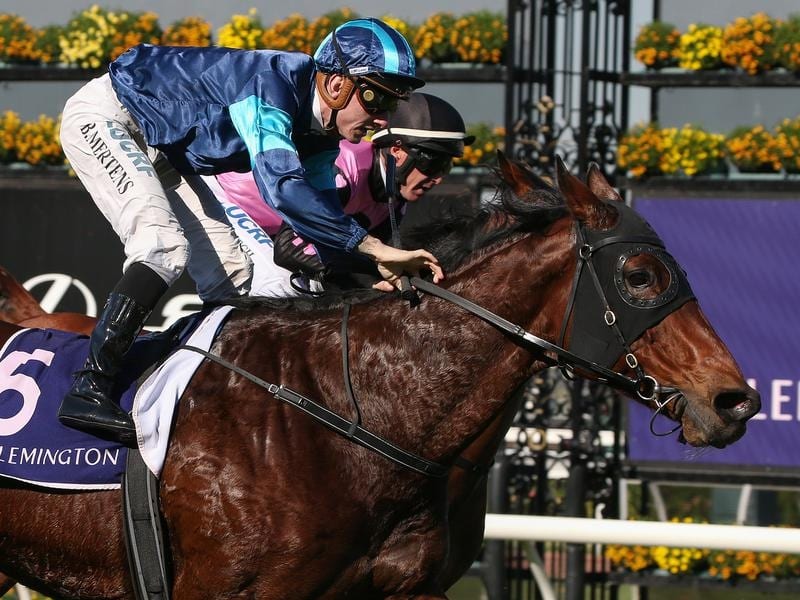 Matt Laurie has trained Moonlover to win first-up, to ease the pain of losing a rising stable star.

A day after saying goodbye to two-year-old Prince Of Sussex, trainer Matt Laurie was in the winner’s stall at Flemington courtesy of the well-backed Moonlover.

Laurie admitted he was flat after Prince Of Success was collected from his Mornington stable on Friday bound for Hong Kong.

Prince Of Sussex won the inaugural running of the $1 million The Showdown at Caulfield last month, immediately attracting huge offers from Hong Kong.

“I would’ve liked to have kept him but I understand it’s a big game changer for some of the owners,” Laurie said.

Moonlover was backed from $21 to $14 in beating the $2.80 favourite Miss Leonidas by a long neck in Saturday’s Pat Lalor Hall Of Fame Trophy.

A trip to Brisbane in a bid to add more black-type to her name is on the cards for Moonlover after the mare bounced back to form.

“She’s been a super mare for us,” Laurie said.

“She was first-up today off a few uncharacteristic runs when she didn’t come up last prep.

“We gave her a break and started again and her trial at Cranbourne was the Moonlover of old.

“She had 13 runs last campaign and maybe that took its toll, but she’s bounced back now and we’ll contemplate a trip to Queensland now.”