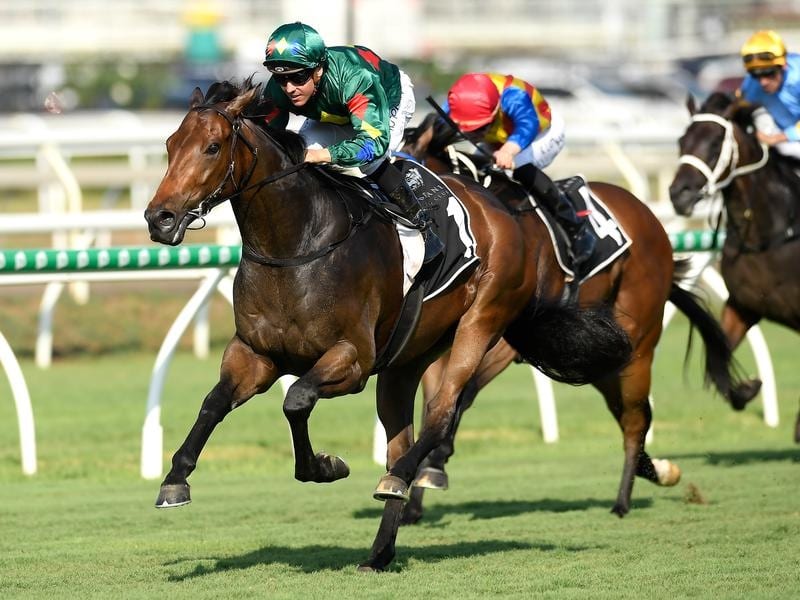 Star Queensland 3yo Alligator Blood is a confirmed starter at Eagle Farm with a favourable forecast.

He was weighing up whether to go straight into Alligator Blood’s main summer mission of the Magic Millions Guineas (1400m) on January 11 at the Gold Coast.

Vandyke said Alligator Blood had a big following and he wanted to be sure before making a decision on the Vo Rogue.

One thing swaying Vandyke was the weather forecast of rain in Brisbane during the week and then cooler weather with a maximum of 28 on Saturday.

“Put it this way if it was hot and humid he wouldn’t be running,” Vandyke said.

“Also it is a Plate race which means he is in very well against these horses at the weights.”

Alligator Blood’s only defeat in seven starts was when he was collared late by Super Seth in the Group One Caulfield Guineas in October.

Vandyke feels Diamond Thunder and Grand Scholar will be the main dangers on Saturday.

The trainer has an ambitious Melbourne program mapped out for the gelding after the $2 million Magic Millions Guineas.

The Australian Guineas at Flemington and the All-Star Mile in March are firmly in Vandyke’s plans.

“After the Millions I’d like to take him to Melbourne for the C S Hayes, the Australian Guineas and possibly the All-Star Mile,” Vandyke said.

“I’ll be guided by how he performs and recovers from the Millions.”

The trainer is also hoping to be represented in the $2 million Magic Millions Classic with two-year-old debut winner Red Stiletto who runs in Saturday’s B J McLachlan Stakes at Eagle Farm.