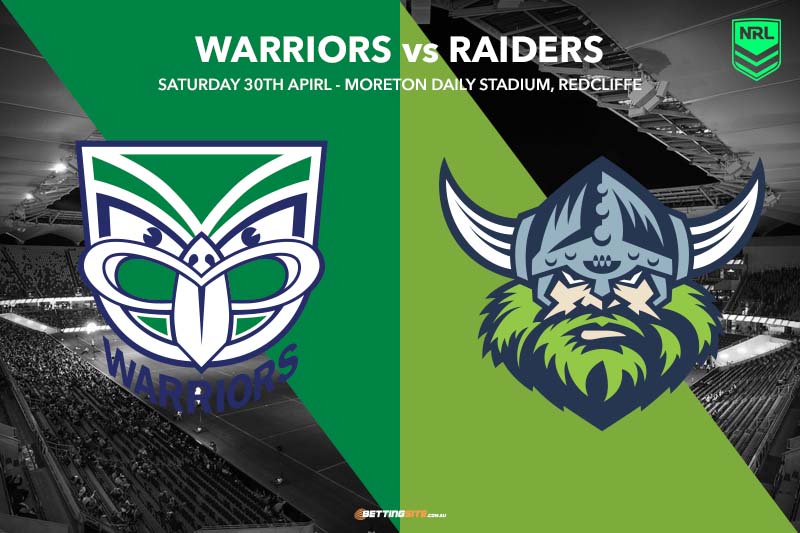 The 2022 NRL Telstra Premiership Round Eight is shaping up as a litmus test for both the New Zealand Warriors and Canberra Raiders when they meet on Saturday afternoon at Redcliffe.

Canberra were bashed and beaten heavily by the Panthers, while the New Zealand Warriors were humiliated in Melbourne in their last start, giving up 54 points in the second half alone. That is not a typo. 54 points in a half of professional rugby league.

The scoreboard for 50 minutes might have looked like Canberra were competitive against the Panthers, but the advanced statistics showed they were blown off the park and the scoreboard eventually caught up to reflect that.

Backing up to travel interstate within six days of a brutal beating is going to be a big hurdle for the Green Machine to overcome, and that is reflected by the fact they are $1.82 in a two-horse race.

The other horse was beaten by 60 in their last start, so the punters are telling you just how little faith they have in the men from the nation’s capital.

Canberra Raiders’ side on paper looks a decent line-up and they have more talent across the park than their opponent, but there is a lot of question marks when you dive a little deeper.

Between Jordan Rapana, Charnze Nikoll-Klokstad and Xavier Savage, they don’t know who the best option is and they’re throwing darts at a dartboard in the hope they find the option.

The absence of Josh Hodgson has meant Tom Starling has to play longer minutes, and as a result his impact is not as big on the opposition’s middle third.

Seeing how poor their attack has been, it makes the under 40.5 total points an extremely attractive option for punters.

Just where do Warriors fans find hope after a 70-10 thumping at the hands of the Storm in Round Seven? Their coach openly admitted he thought certain players threw the towel in, and even he himself didn’t ever believe they could win that game.

Back-to-back losses has seen them fall back to what many believed they would be for season 2022, which is a team who will be outside the eight.

They’re still just $2 in the head-to-head market with Unibet, which almost seems wrong with that hiding so fresh in the memory, and adding to that pain is the injuries to Josh Curran and Dallin Watene-Zelezniak.

They’ll also be without Aaron Pene who will serve a one-game suspension, further testing the depth of their middle-forward rotation.

The running threat both Jack Wighton and Chanel Harris-Tevita provide their teams is a net positive, and it will be interesting to see how each team handles it defensively.

Wighton’s run is obvious, as he has a tendancy to wind up from the back fence and try to use his power to bend the line, while Harris-Tevita will hold the ball in two hands for longer before he tries to skip to the outside of his closest defender.

Despite Canberra’s indifferent performances to start the year, Wighton has tried valiantly and produced some good moments so far this season.

Against a team who gave up in their last game, he will no doubt challenge them for the full 80 minutes to see how committed they are in trying to rebound. The $2.70 on offer for him to score at any time is an absolute must, while the $14 to score first will get a lot of attention with the top bookmakers.

This game is a coin toss and will have plenty of punters scratching their head, but it could be a week to do something silly and back the Warriors. They’ve won their last three games at Redcliffe and the Raiders have failed to cover the line in their last three games away from GIO Stadium. Take the $8.50 on offer for the Raiders to lead at halftime and lose, and the $3.40 for the Warriors at 1-12 points.