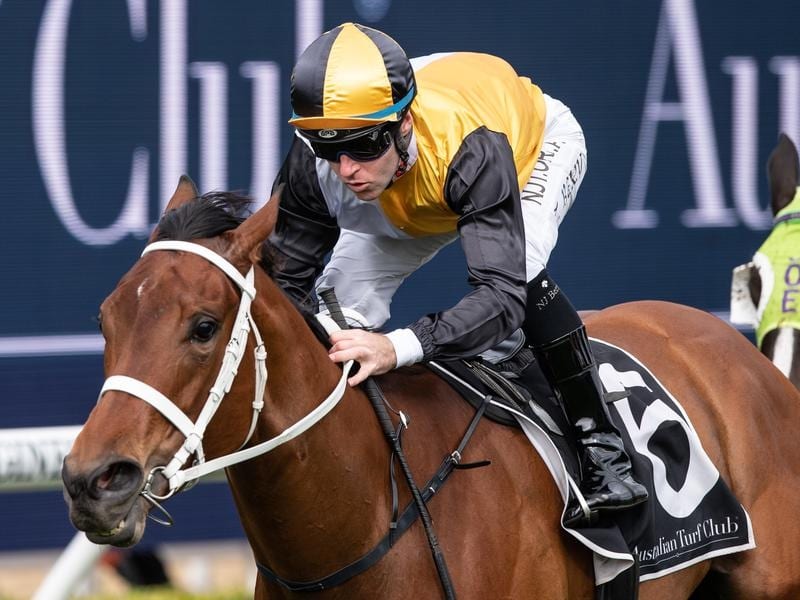 Giovanna Run is on her way to the Group One Flight Stakes after breaking through at Randwick.

Chris Waller has no intention to spell Giovanna Run after the filly’s all-the-way maiden win, instead naming the Group One Flight Stakes as a potential target.

A daughter of Waller’s 2015 Caulfield Guineas winner Press Statement, Giovanna Run has the trainer convinced her victory on Randwick’s Kensington track on Saturday is a precursor of bigger things to come.

“He (Press Statement) was a brilliant late-season two-year-old winning Group One races and improved at three so you would expect his stock to do the same,” Waller said.

“I would find a race in four weeks, not spell her and give her a chance to get through to the Flight Stakes.”

A lack of obvious speed and an outside barrier convinced connections to ride her positively but it was Berry who took the initiative to lead.

“I spoke to Chris before it and there was obviously a lack of speed in the race so we just thought we’d press forward,” Berry said.

“We didn’t really have a set plan on where we’d end up in the first four but when I was getting there so easy, she feels like she’s a filly that really needs to get into a nice rhythm, and I was able to do that in front.

“She switched off really well for me and I was able to get a nice, easy two furlongs mid-race and that’s what probably won it.”

After opening a $2.90 favourite, Giovanna Run drifted out a point but proved a class above her rivals to score by three-quarters of a length over Bazooka ($5), who tried hard but was no match for the winner.

The runner-up’s David Payne-trained stablemate Montefilia ($6) was doing her best work late to finish another short neck away.