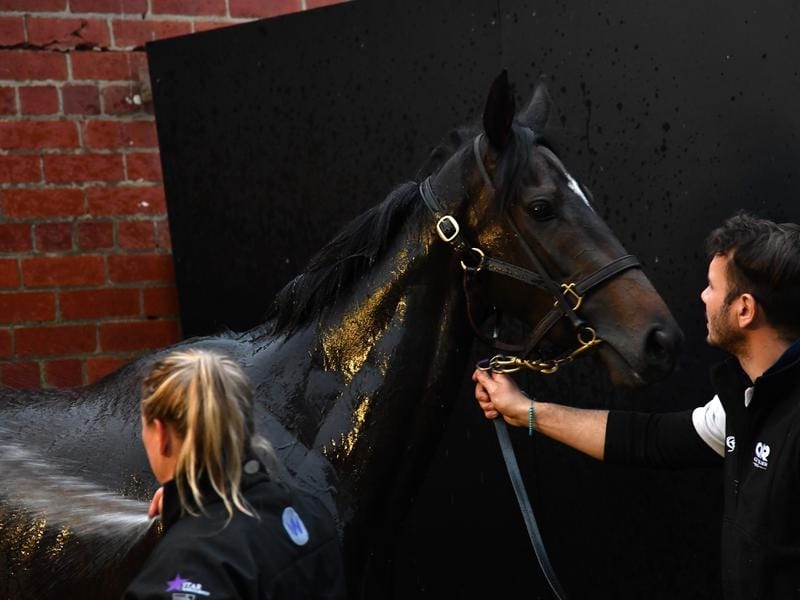 Verry Elleegant will miss the Caulfield Cup with the Cox Plate a preferred spring target.

Verry Elleegant is set to head to the Cox Plate after galloping at The Valley and will not be an acceptor for the Caulfield Cup.

Trainer Chris Waller wanted to give Verry Elleegant a look at The Valley ahead of the Cox Plate, at the same time keeping options open on a Caulfield Cup start.

Owner Brae Sokolski said the decision was reached after Verry Elleegant worked at The Valley on Wednesday morning.

“What we do is wait until Chris Waller tells us what to do and Chris was very satisfied with her work this morning,” Sokolski told RSN927.

“She got around Moonee Valley well, handled the camber and put in typical characteristically strong Verry Elleegant work, so he (Waller) intends to be full steam ahead to the Cox Plate.”

Jockey James McDonald travelled from Sydney to partner Verry Elleegant on Wednesday morning, giving the mare the thumbs up.

McDonald said Verry Elleegant felt a little awkward early around the bends, but extended well in the straight to defeat galloping partner Fields Of Yulong.

“She feels fantastic in her action and there was a little question over her handling that track, but I think she’ll be fine,” McDonald said.

“We were in the same situation with Hartnell when he had his first crack.

“They were fairly similar to each other, a little bit new early having a look around, but he came here and run second in a Cox Plate, adapting pretty quickly, and I’m hoping she does to.”

Winner of the ATC Australian Oaks (2400m) in the autumn, Verry Elleegant was struggling to recapture her best form before victory in the Hill Stakes (2000m) at Randwick on October 5.

McDonald said the mare had made considerable improvement from that win.

“I thought she was at the crossroads there for a second,” McDonald said.

“I thought she was just another filly that was going to do her thing and fade off into the sunset.

“I don’t ride her a lot but I have sat on her a couple of times over the last couple of weeks and she definitely has improved out of that race.”