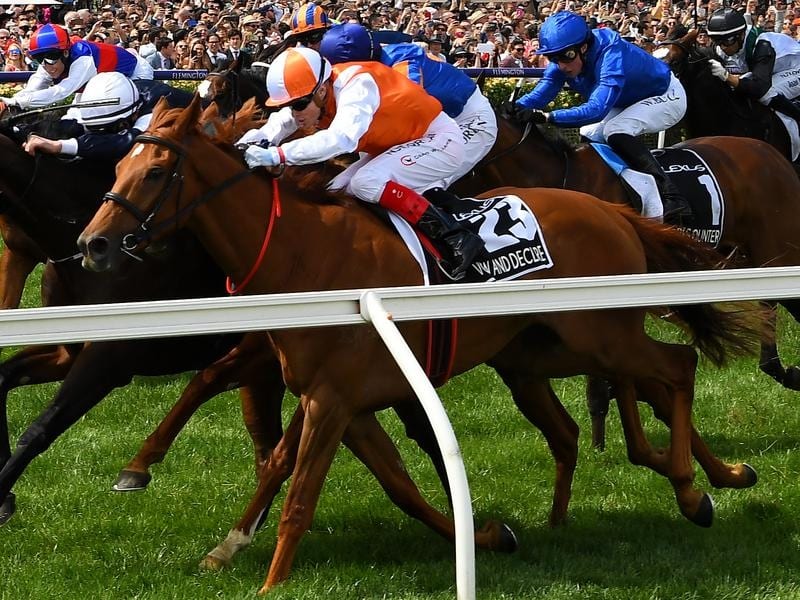 Melbourne Cup winner Vow And Declare (orange) has shown his fitness to resume in the Australian Cup.

Melbourne Cup winner Vow And Declare is on track to make his return in the Australian Cup at Flemington after pleasing his trainer in a jump-out.

Vow And Declare continued his preparations towards a race return in an 800m jump-out on the course proper at Flemington on Friday morning under jockey Craig Williams, and showed sharpness to feature prominently after running on the outside of the field.

Pleased with the star stayer’s fitness levels, trainer Danny O’Brien indicated the four-year-old would make his return in the $1.5 million Australian Cup (2000m) on March 7 at Flemington ahead of the $4 million Queen Elizabeth Stakes (2000m) in Sydney the following month.

“We were really happy with him. He was nice and sharp and his recovery was excellent. His fitness levels are good.

“I think the way he trialled this morning he would be about 99 per cent that he’ll be going to the Australian Cup.”

O’Brien said Vow And Declare had matured and come back a stronger as an autumn four-year-old.

“We’re looking forward to seeing what he can do this year,” he said.

Stablemate, VRC Oaks winner Miami Bound, makes her return to the races in Saturday’s Group Two Autumn Classic (1800m) for three-year-olds at Caulfield on a path to Group One targets in Sydney.

Miami Bound was the favourite on race eve and O’Brien is confident the filly has done enough work for 1800m first-up.

“She’s taking on the boys but she won’t lose for fitness,” he said.

“She’s had a good summer and she’s in good shape.

“We’re looking forward to running her tomorrow and seeing how she has progressed too.”

After the Autumn Classic, Miami Bound is scheduled to run in the Alister Clark Stakes (2040m) at The Valley before heading to Sydney for the Group One Vinery Stud Stakes (2000m) for fillies and Group One ATC Australian Oaks (2400m).