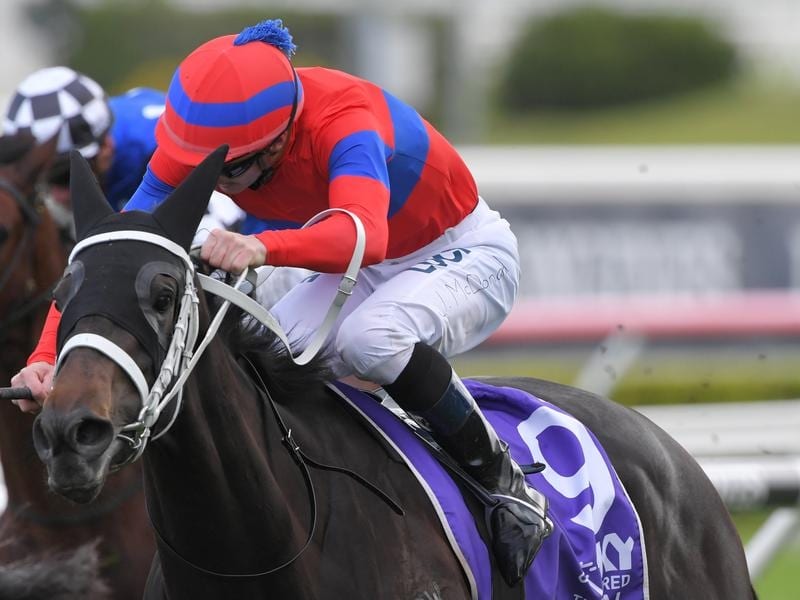 Verry Elleegant has regained her standing as a major spring contender with a Hill Stakes win.

Verry Elleegant has returned to winning form with a last-gasp victory in the Hill Stakes at Randwick, putting herself back in the frame for the major spring races.

Trainer Chris Waller said the Cox Plate and Caulfield Cup were back on the table after the mare nailed Samadoubt in the final bound to win Saturday’s Group Two, 2000 metre race by a nose.

The ATC Australian Oaks winner in the autumn, Verry Elleegant’s racing manners have let her down at times and Waller and his team have worked hard to iron out the kinks.

Their persistence appears to be paying off with Verry Elllegant ($2.40 fav) overcoming a moderate tempo to come from near-last and win by a nose from Samadoubt ($5.50) with another three-quarters of a length to Life Less Ordinary ($7.50).

“We just went back to the basics, that was why she was back last,” Waller said.

It was good to see her settling a lot better.

“While she only won by a small margin, I think the run had a bit of merit considering where she’s come from.”

Verry Elleegant had been touted as a Cox Plate contender at the start of the spring but the jury was out after she was unplaced at her first two starts.

Waller had pre-empted that her performance in the Hill Stakes would be pivotal to spring plans for the mare but wanted to let the dust settle before he set a path in stone.

“I wouldn’t want to jump into it today, I want to assess everything, but it will be the Cox Plate or the Caulfield Cup,” Waller said.

Verry Elleegant was ridden by James McDonald to give the trainer-jockey combination its fourth win from the first six races at Randwick on Saturday, following earlier victories by Global Quest, Dealmaker and Funstar.

McDonald indicated he regarded Verry Elleegant as more suited to a Caulfield Cup (2400m) than a Cox Plate (2040m).

“She made a long sustained gallop and I know she will stay a mile-and-a-half and I think that is what she is wanting,”McDonald said.

Bjorn Baker was happy with the effort of Samadoubt, who wasn’t at his best on rain-affected ground, and said the runner-up would also be considered for a Caulfield Cup start.