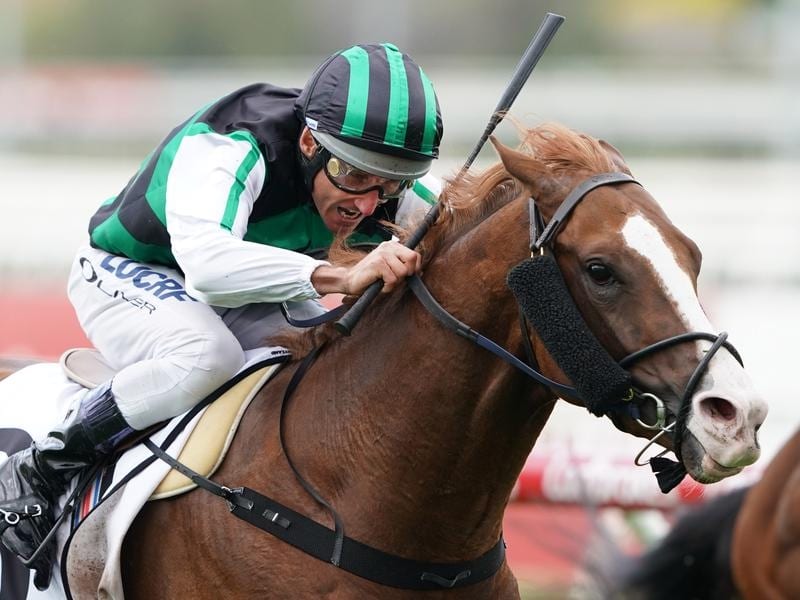 Serious Liaison has taken a step closer towards a Victoria Derby start after winning at Caulfield.

Trainer Danny O’Brien plans to use the Group Two Vase at The Valley to test the Victoria Derby credentials of Serious Liaison after the colt’s victory at Caulfield.

Serious Liaison ($5.50) came from back in the field out wide and knuckled down to his task under the urgings of jockey Damien Oliver late in Wednesday’s Drinkwise Plate (1600m) for three-year-olds to grab Oscar Boy right on the line.

The short half-head victory was Serious Liaison’s second win from four starts and O’Brien plans to step him up to 2040m at his next start on Saturday week at The Valley.

His performance in The Vase will give O’Brien a better guide on whether to press on to the Victoria Derby (2500m) at Flemington a week later.

“The Vase is always a good indicator,” O’Brien said.

“We’ll take him there and that will give us an idea.

“He’s a promising young horse and I think he will be better suited at 2000 metres and potentially even further.

“Today is the first time he has actually got out in a race. In his first three races he’s never found room. Damien took that out of the equation today and said ‘I’m going back and I’m going to have a big long run at them’.

“He set him a little bit of a task and he got a bit lost out there. It looked like he was going to win more easily than he did, but he’s learning and he’s a nice horse.”

Serious Liaison tightened from $26 to $15 for the Derby after Wednesday’s win.