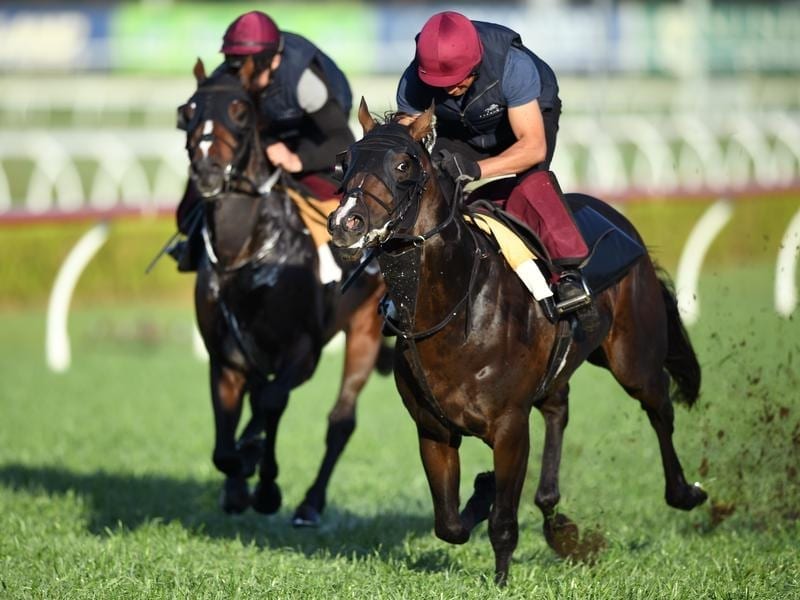 U S Navy Flag’s team is happy with the Irish sprinter’s track work ahead of The Everest but praying there will be no more rain.

Coolmore principal Tom Magnier said the sprinter, the first internationally trained horse to run in the world’s richest turf race, handled the ground at Canterbury Racecourse where he is quarantined, better on Tuesday than he had on previous, wetter days.

U S Navy Flag worked in blinkers over 1000m and pulled away from travelling companion Somerset Maugham late in the hit-out.

“I went to mass on Sunday and I asked Him if you could just stop the rain for a little bit. I know we need it up in the Hunter Valley but if it stops raining between now and then it will be an exceptional race,” Magnier said.

Trainer Adrian O’Brien’s travelling head lad Andrew Murphy said despite being a casual track worker, when it comes to racing U S Navy Flag is forward all the way.

“He’s a different horse when he gets in the race. Saturday should brighten him up,” he said.

“We are happy with him this morning. The ground conditions are not ideal but it’s something we’ve had to put up with.”

Murphy said U S Navy Flag was one of Europe’s best sprinters and following his July Cup win he was put away specifically to come to Australia.

Stable Ryan Moore, who will arrive from England late on Thursday, has studied every horse in the race with Magnier saying they are treading on new ground.

“We know we have a big task to take on the Australian horses. We know the best sprinters in the world come from here. We’ll learn a lot on Saturday,” Magnier said

“Your Redzel, your Trapeze Artist, your Vega Magics – these are household names. Around the world, these are the best sprinters. But the form is changing a lot so it’s probably hard for anyone to get a good read on the race.

“That’s the excitement around it, no one can pick out a strong favourite.”

Magnier said to win The Everest would be a huge coup for all involved.

“For a horse like U S Navy Flag to win an Everest it would be a pinnacle for Ryan Moore, for Aidan O’Brien or for Coolmore.”