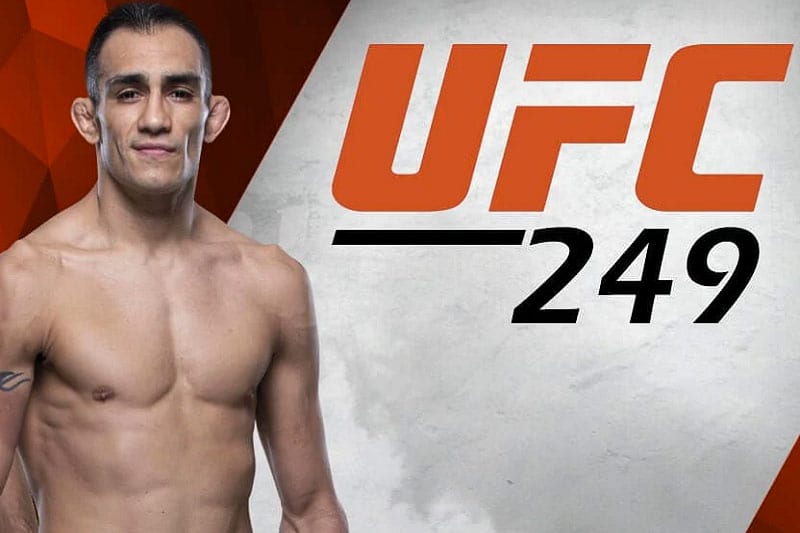 We are only a few days away from the first major sporting event in months, as UFC 249 will take place this Sunday (AEST) in Jacksonville, Florida.

We have already brought you the top five fighters to watch at UFC 249, and now we take a look at the latest odds and form for every matchup on the card.

The UFC 249 Main Event is the most important and anticipated fight on the card, with Tony Ferguson and Justin Gaethje ready to make history in Florida. Ferguson has not lost a fight for over seven years and now puts his 12-win streak on the table against a walking highlight in Gaethje, who has the power and accuracy to destroy any fighter that approaches him without extreme caution. No matter which way it goes, this will be a beauty.

Will Henry Cejudo retain his belt, or will a fighter that hasn’t seen the octagon since 2016 steal it from him? There is plenty to analyse when looking at this bantamweight title bout, especially considering the CVs of both fighters. Cejudo could be considered one of the best fighters in history, but Dominick Cruz has also won his fair share of titles. This is one fight you don’t want to miss.

If you are looking for a highlight, this is the fight for you. Francis Ngannou is a dangerous man who has knocked out his last three opponents in a combined 142 seconds, whilst Jairzinho Rozenstruik is 10-0 and gaining momentum. This fight has been reduced from five rounds to three, but that won’t matter as it could end within the first few minutes.

Jeremy Stephens and Calvin Kattar sit seventh and ninth in the UFC Featherweight rankings respectively, making this an important fight in the context of the division. Whoever wins will have a chance to rise even higher in the rankings and mount a challenge to Australian champion Alexander Volkanovski.

Big boys with fast hands are brilliant to watch, and that’s exactly what makes Greg Hardy and Yorgan De Castro good fighters. De Castro went into his debut with very little hype, but after a massive walk-off knockout, you have to start taking notice of him.

It is hard to look past this matchup when considering what could be the most exciting bout of the day. Donald Cerrone has everything to prove against Anthony Pettis, who has previously beaten Cowboy in the past. Both fighters are coming to the back end of their careers, but one more run at title contention is up for grabs here.

Aleksei ‘The Boa Constrictor’ Oleinik openly challenged former titleholder Fabricio Werdum to this fight. You cannot deny the talent it takes for a heavyweight to specialise in submissions, as most would try for huge knockouts, making Oleinik a tough opponent to pick. Werdum is heavily favoured, however, as his experience within the division and against grappling fits the matchup well.

This is the only one of the proposed women’s fights that has survived the constant changes to the UFC 249 fixture. Carla Esparza is a former strawweight champion, whilst Waterson has never been given the opportunity to fight for a title. Ranking seventh and eighth respectively, Esparza and Waterson are sure to put on a hell of a show.

Starting off the prelim card will be two powerful middleweights who are almost at evens in the match betting. Both fighters are veterans within the division, and both are hungry to climb higher in the rankings. The winner of this fight will have the opportunity to secure a bigger bout later in the year, possibly leading to a chance against the current UFC Middleweight champion, Israel Adesanya.

A rematch between two fighters that had an entertaining first bout will always be tasty, which is why you shouldn’t gloss over this matchup. Vicente Luque came out on top in the last fight, winning with a late submission after a brutal battle. The money lies with Luque again, but the sheer entertainment value should be more than enough reason to revisit this pairing.

There’s plenty to like about the 12-0 Bryce Mitchell, who at the young age of 25 has plenty of time to become a featherweight star. Charles Rosa has found it difficult to enter the ring recently due to multiple injuries, including a neck issue. The odds work well both ways and the fight will be tough to call, but more eyes will be on the youthful Mitchell here.

Only one light heavyweight fight will take place on Sunday, being the opening bout of the day. Ryan Spann is a young up-and-comer who has his career with great aplomb, whilst Sam Alvey is a veteran scrapper that is edging towards 50 career bouts. This could be one of Alvey’s last UFC bouts if he cannot get the win.