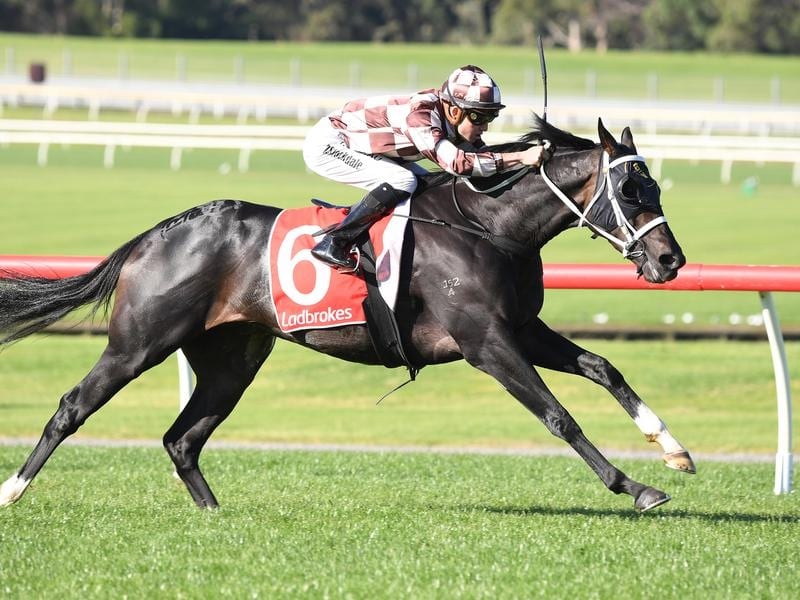 Imported stayer Jack Regan has racked up his second Australian win at Sandown.

Sessions of jumping combined with the addition of blinkers has turned around the fortunes of former English gelding Jack Regan.

Now in the care of Trent Busuttin and Natalie Young, Jack Regan took out Monday’s Ladbrokes Odds Boost Exotics Handicap (2400m) at Sandown to back up his victory at the track 12 days ago.

Jack Regan was the heavily supported $3.40 favourite under Thomas Stockdale and gave the young jockey a double after his earlier victory on Final Man in the Ladbrokes Switch Handicap.

Busuttin and Young had high hopes for Jack Regan soon after his arrival in Australia.

However it took until Jack Regan’s 10th start in Australia for him to break through at Sandown before being back in the winner’s stall again on Monday.

“It’s amazing what a bit of confidence can do when they get their nose in front,” Busuttin told broadcaster racing.com.

“That’s what we bought him for a couple of years ago.

“We paid big money for him out of one of those in-training sales and he’s certainly been frustrating, but like a lot of these European horses they usually take a bit, and he’s one of them.”

Stockdale had Jack Regan settled back in the second half of the field early in the race before making a sweeping run out wide down the Sandown hill to the home turn.

Jack Regan hit the front early in the straight, going on to a 3-1/4 length victory.

“I was thinking don’t get there too soon as he was travelling pretty easily and I was thinking he would turn it up, but he didn’t today,” Busuttin said.

“It’s good for a big bunch of owners and big supporters of the stable.

“There’s a 2600 metre race at Flemington in a couple of weeks.

“He obviously likes to get over a bit of ground so we’ll step him up and see how he goes in a Saturday race.”

Monday’s double came at a cost for Stockdale who was suspended for eight meetings on a careless riding charge aboard Jack Regan.

He begins his suspension after racing at Caulfield on Saturday and returns for the Flemington meeting on April 25.

Stewards had concerns Cryptic Jewel had been treated within the one clear day cut-off period and after questioning Stanley, they adjourned the inquiry.