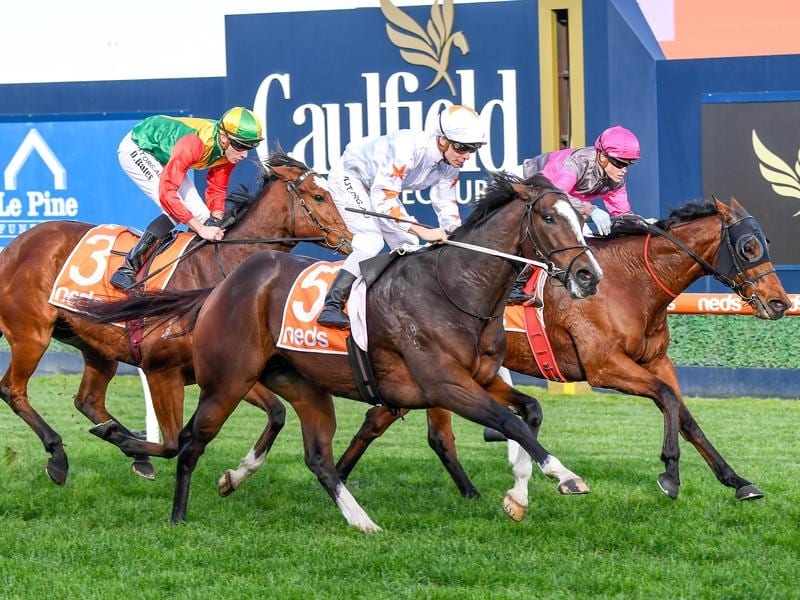 Tavisan (outside) will be given the chance to redeem himself in the Sir John Monash Stakes.

The younger member of the Mick Price and Michael Kent Jr training partnership is expecting a better performance from Tavisan with his return to his home track at Caulfield.

Tavisan is on the quick back-up from running in the All Victorian Sprint Final at Flemington last Saturday in which the sprinter finished last behind Lord Von Costa.

Also engaged in the Sir John Monash Stakes after unplaced efforts at Flemington are I Am Someone (fifth) and Snitzkraft (ninth).

Kent Jr said the 1200m race did not work out for the enigmatic Tavisan who was challenged from the 600m mark and wilted in the run home.

But back to 1100m on Saturday and a return to Caulfield where Tavisan was successful three starts ago, Kent Jr is expecting an improved showing.

“He’s a horse that wins his races when he doesn’t get pressured too far out,” Kent Jr said.

“Last time he was collared a good three furlongs from home and they were going quick and he ultimately failed.

“He is definitely better suited around a bend and back to 1100 (metres) at his home track.

“Obviously we’ve got to be wary of Jungle Edge who likes to roll forward, but we’ve got a good jockey (Ben Melham) and a nice barrier so we’re having a throw at the stumps in a Group Three.”

Kent Jr said Tavisan had a quiet week at Caulfield and was only saddled on Thursday for a quiet hit-out.

He is also expecting the track conditions, currently rated in the slow range, to be ideal.

“He’s had a swim, gone off the pony and went a half-mile in evens on Thursday,” Kent Jr said.

“That’s been it for the week and he’s bouncing.

“The trick to him is getting him to run the race right.”

Price and Kent Jr have elected to scratch Right You Are from the Neds Handicap (2000m) after the three-year-old drew the extreme outside barrier.

“He’s a very smart horse, but the speed map looked tricky from barrier 15 so we’ll keep him for Flemington next week and run him over 1600 metres,” Kent Jr said.