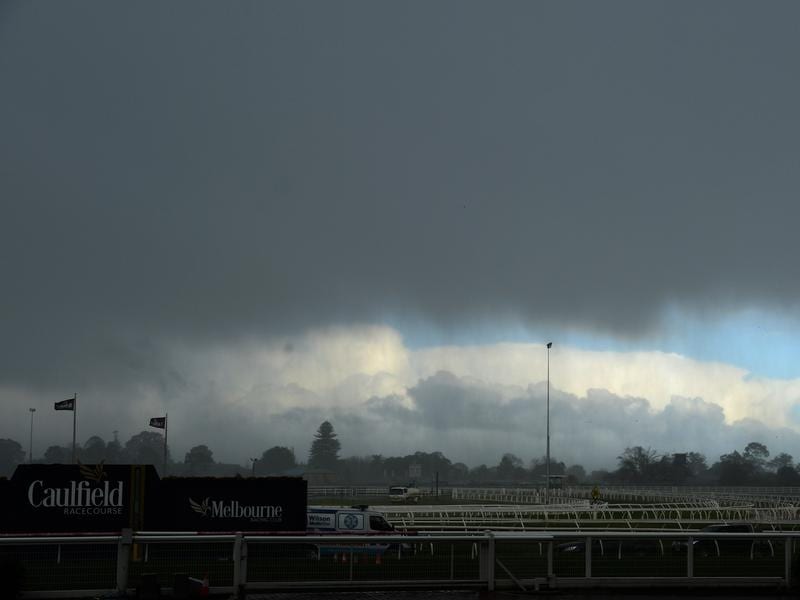 Lightning forced stewards to delay racing at Caulfield as a thunderstorm swept through Melbourne.

After a delay because of lightning in the area, racing got back underway at Caulfield with Turn The Tide bringing up a winning double for trainer Cindy Alderson.

Horses and jockeys were out on the track ahead of the start of the fourth race on Saturday’s program, the Ladbrokes Cash Out Handicap (1400m), when stewards called them back in because of lightning strikes in the area.

A short period of hail also soon followed after the horses had returned to the stabling area.

After the skies cleared the meeting got back underway under a revised start times.

The Ladbrokes Cash Out Handicap was run about 20 minutes later than first scheduled and the Alderson-trained Turn The Tide ($10), ridden by Dwayne Dunn, overhauled last-start winner Smart Elissim ($4.20) to score by half a length.

It brought up a double for Alderson from the first four races on the program after Miss Vixen had taken out the Ladbrokes Cash In Handicap (1200m) with Luke Currie aboard.

“Cindy is a very good trainer and turns the horses out well, so it’s great to ride a winner for her,” Dunn said.

“We went to the start and it looked like Doomsday was turning up.

“Obviously we’re back on track with the sun coming back out. So hopefully the rest of the day plays out well.”

Aldreson said it was a thrill to bring up the winning double with Turn The Tide, who was being tried over 1400m for the first time in his 10th start.

“He’s been a horse that’s been a little frustrating but he got a lovely ride today by Dwayne and it was good to see him win over 1400,” Alderson said.

“I always felt he would like this trip but he had failed at the 1200 metres twice. I thought maybe just a little bit easier pressure race (over 1400m), and he really dug in deep.”