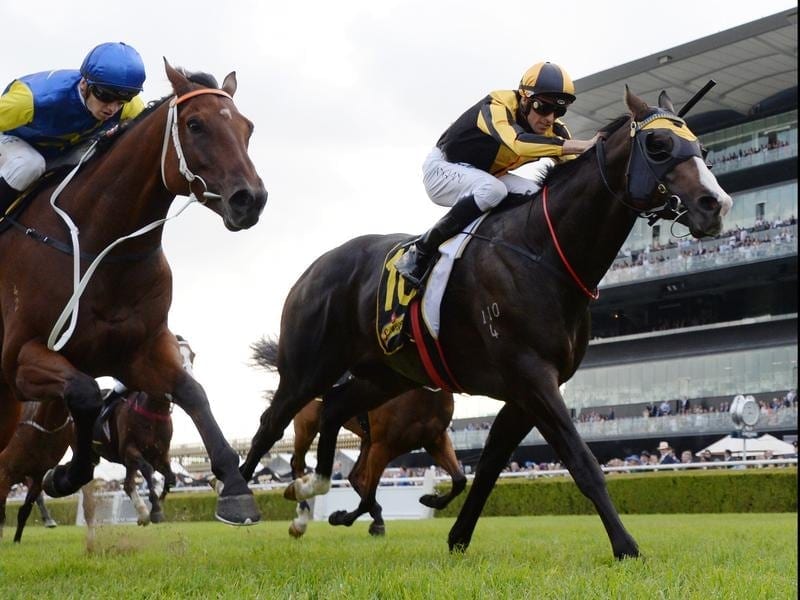 Everest favourite Trapeze Artist (r) will make his return to racing in the Theo Marks Stakes.

While racegoers have now seen several Everest contenders in action, the focus turns to the return of Trapeze Artist, the favourite for the $13 million race.

Trainer Gerald Ryan kept an eye on Saturday’s sprint races at Randwick and Caulfield but is more than happy with his charge who will resume in the Group Two Theo Marks Stakes at Rosehill.

Last year’s Everest winner Redzel began his campaign with victory in the Concorde Stakes at Randwick in which fellow slot holder Invincible Star was third.

Brave Smash and Santa Ana Lane finished third and fifth respectively in The Heath at Caulfield where 2017 Everest runner-up Vega Magic was fourth in the Memsie Stakes.

Kementari, a close second in the Memsie, is in the running for one of the two remaining Everest slots.

“Redzel was good and Invincible Star will improve,” Ryan said.

“Santa Ana Lane and Vega Magic also went well and it will be interesting to see what happens next week with Shoals and Nature Strip.

“But I couldn’t be happier with Trapeze Artist. He looks well and is working well for him.

“He’s not the best track worker but he’s bright and happy.”

Nature Strip, who does not yet have a slot, and triple Group One winner Shoals are set to clash in the Group Two McEwen Stakes at Moonee Valley on Saturday.

Trapeze Artist is raced by Bert Vieira who put the colt’s stud career on hold in favour of racing in The Everest for slot holder Aquis Farm.

Interest in Trapeze Artist as a stallion prospect was high after he completed his stellar season with his third Group One win in the All Aged Stakes.

He also won the Golden Rose last September and before his All Aged win he beat Redzel and fellow Everest runner In Her Time to win the TJ Smith Stakes.

“You don’t really know how they are going to go from three-year-olds to four until you race them but he is on track,’ Ryan said.

“The plan is to run in the Premiere Stakes (September 29) before The Everest.”

Redzel remained the $6 second favourite after Saturday for The Everest on October 13 behind Trapeze Artist at $4.50.