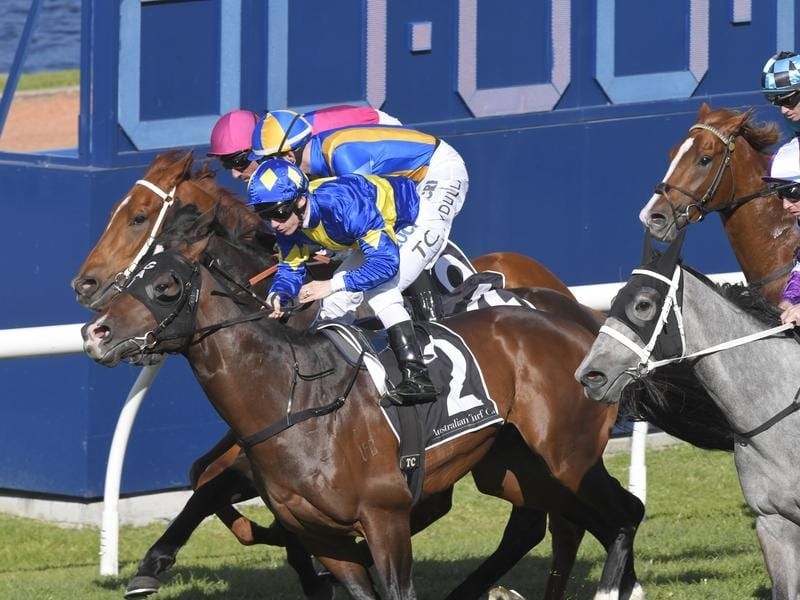 Adrian Bott expects Dawn Passage (2) to rebound from a last-start flop in the Golden Rose.

It has taken a leap of faith for training partners Gai Waterhouse and Adrian Bott to commit to starting their two runners in the Group One Golden Rose, but with risk can come significant reward.

Waterhouse and Bott have backed the ability of Dawn Passage to rebound from a disappointing last-start performance in the Run To The Rose two weeks ago, and they have shown equal confidence in raising the bar for unbeaten Yao Dash.

Yao Dash was an impressive winner on debut at Canterbury in August then led throughout to stave off subsequent Tea Rose Stakes winner Funstar in a high-quality benchmark race at Randwick.

But with just two career starts, Yao Dash will be conceding race experience to all his seven rivals and while he appears to get an uncontested lead in Saturday’s race, Bott concedes the three-year-old faces a steep challenge.

“It’s an ask for Yao Dash. He’s in his first preparation and going into this at third start and whilst his two runs have seemed brilliant and he’s been quite faultless, he’s at a different level again and a different level of pressure,” Bott said.

“The big question is can he handle that significant step up in class so early in his career? Has he got enough grounding and experience or will it all be a bit too soon?

“He’s still six months away physically but from what we’ve seen of him at home he has improved a lot and he’s so well within himself he deserves a chance.”

Yao Dash has had support in early TAB fixed odds markets and was at $6 on Friday with Run To The Rose winner Bivouac holding sway at $2.50.

Dawn Passage is one of the outsiders of the Golden Rose field at $26 after following a first-up win in the Rosebud with a fading fifth behind Bivouac when ridden closer to the speed.

Bott said the colt would revert to his usual racing pattern on Saturday and be allowed to find his feet early, while the stable has made a gear change and taken the blinkers off.

“He was very disappointing in the Run To The Rose but we’ve put a line through it and put it behind us,” Bott said.

“There were a couple of factors at play, the track conditions on the day and he probably raced a bit too close to the speed with the blinkers on.

“We still believe in the colt, particularly on what he’s showed to date if you take out that one performance and with the blinkers off and back to his regular racing pattern, it will give him a chance to finish off.”

Waterhouse and Bott will be chasing a breakthrough win in the Golden Rose (1400m), the stable’s best recent result a second with Speak Fondly four years ago.

“We’ve come close before and it would be nice if one of these horses was able to do it,” Bott said.