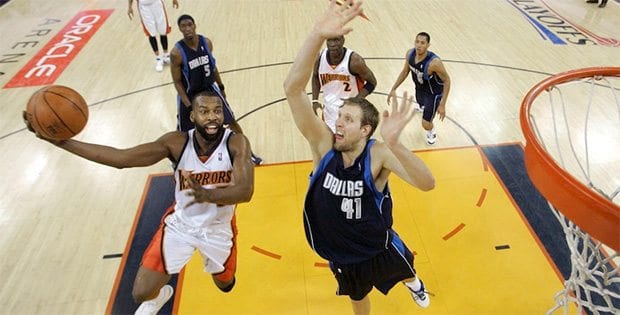 THE 16 best NBA teams go at it in the NBA playoffs each year, whittling it down until there are only two left to fight for the Larry O’Brien Trophy in the Finals.

And, along the way, there are always surprise upsets and boil overs that only add the the intrigue of the game.

Form number eight seeds beating the best teams teams in the league to underdogs making it all the way to the finals, there is always something special during the playoffs.

While we haven’t seen anything like it yet in 2017, there is sure to be a surprise.

Here is our take on the greatest playoff upsets in NBA history.

The eighth seeded Memphis Grizzlies went into this series against the number one Spurs having never won a playoff game. That all changed when they knocked over the Spurs in six games to cause one of the greatest boil overs in NBA history.

Riding their bulking power forward Zach Randolph, the Grizzlies bullied the Spurs on the defensive end. Randolph and fellow gun big man Marc Gasol averaged over 20 boards per game between them and Tony Allen and Mike Conley keyed in on Manu Ginobili and Tony Parker, rendering them ineffective.

Star scorer Rudy Gay might have gone down, but it did not stop the Grizzlies from causing a huge upset in the opening round back in 2011.

For the history buffs, this was the end of the greatest era in Boston’s remarkably charmed existence.

The Celtics had won eight of the past nine championships, but the wheels were slowly beginning to fall off, with legendary Bill Russell on his last legs and many tipping Wilt Chamberlain and the energised Los Angeles Lakers to deliver the knock out blow.

Add Jerry West and Elgin Baylor to the mix and you have one of the most formidable combinations of all time.

But, sometimes, teamwork and experience beats talent and, after pushing the finals to a decisive seventh game, the Celtics would have to win in the Lakers house.

So confident were they Lakers that they had post game programs placed on every seat telling fans what would happen “WHEN” the Lakers win the title, and balloons with “world champions” suspended from the roof.

They would never get a chance to use them, with the Celtics pulling off a two-point win to claim the title and send a retiring Russell out on a high.

While they weren’t the first number eight seed to knock over number one, the We Believe Golden State Warriors of 2007 were certainly the most exciting.

Sporting a run and gun offence orchestrated by combative point guard Baron Davis, the Warriors finished one game above .500, while the Mavericks won a ridiculous 67 games and every one expected them to cruise through.

But the Warriors had other ideas.

Riding a rabid fanbase that packed Oracle Arena every night, the Warriors – on the back of Davis’ 25 points per night – would vanquish Dirk Nowitzki and the Mavs in six games, becoming the first number eight seed to knock over number one in a seven game series.

Way back in 1994, a young, raw Dikembe Mutombo was just making his way in the NBA, on his way to becoming one of the league’s greatest defensive forces.

But his Denver Nuggets would make history in the first round when they came back from 2-0 down to win the series in five games, as the first number eight seed to knock over number one.

No one gave the Nuggets a hope in hell. This was a Seattle SuperSonics team featuring Shawn Kemp and Gary Payton that won 63 games and would one day meet Michael Jordan’s immortal 72-10 Bulls in the NBA Finals.

But not this year.

Mutombo’s “I can’t believe it”, in his trademark Congolese Cookie Monster drawl, at the end of game five – an overtime thriller – has become iconic.

Just quietly, the Nuggs might have made it to number one, had they pulled off the incredible against the Utah Jazz in the second round, after fighting back from 3-0 down to force game seven, which they unfortunately lost.

1999: New York Knicks make it all the way to the NBA Finals

This is not just one upset, this is a litany.

The 1999 New York Knicks scraped into the playoffs as the eighth seed and then proceeded to knock over every other eastern conference opponent they faced, before finally losing in the Finals.

After a lock out shortened season, this one was always going to have some intrigue and so it was the Knicks, riding the likes of new men Marcus Camby and Latrell Sprewell – and the bounce of the ball to the unlikeliest of finals appearances.

The Knicks knocked over Miami in a deciding game five (the first round was best of five, not seven back then) thanks to an Allan Houston buzzer beater that bounced all over the place before falling falling down the cylinder.

The followed that up by slaughtering the Atlanta Hawks in a four straight sweep, but all looked lost in the conference finals when tower of power Patrick Ewing went down with injury.

Ewing was the driving force for the Knicks and his injury should have ended the series. But Camby Sprewell and company were not having it.

Larry Johnson’s iconic four point play in game three gave the Knicks a 2-1 lead in the series and they never looked back, booking their spot in the finals with a 4-2 series win.

Of course, attrition prevailed in the finals and the Knicks were never going to beat a San Antonio team featuring twin towers David Robinson and Tim Duncan, despite Houston and Sprewell combining for more than 47 points per game between them.

This has to go down as the all-time greatest upset in playoff history. The Knicks were never given a chance to get out of the first round, were never favourite in any series and almost pulled off one of the great fairy tales of modern sports