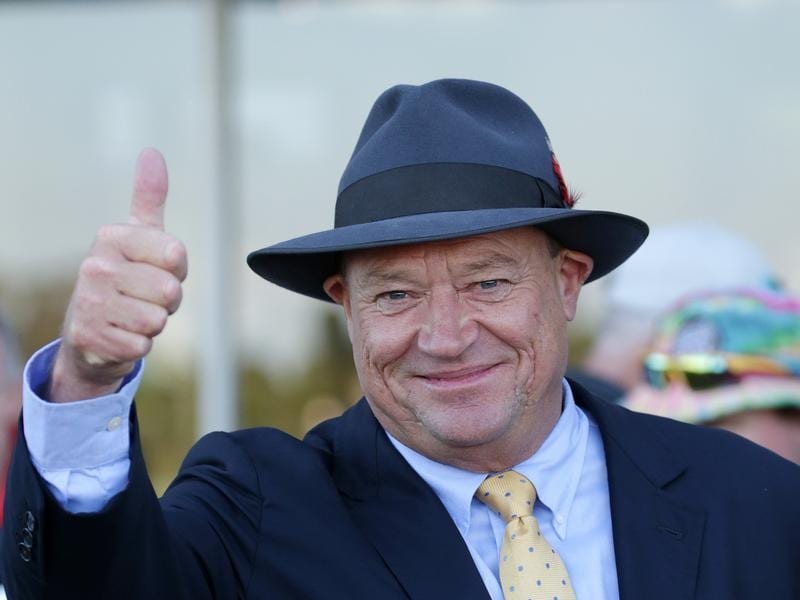 Trainer Tony McEvoy will have two chances in the Group One Stradbroke Handicap at Eagle Farm.

Trainer Tony McEvoy believes he has found the key to his horses racing well in Queensland and hopes to confirm it in the Group One Stradbroke Hanadicap.

McEvoy will be chasing his seventh Group One win of the season with Despatch and Dollar For Dollar in Saturday’s $1.5 million race.

His best win in Queensland so far has been the 2018 Magic Millions 2YO Classic with Sunlight who has since proved herself one of Australia’s top sprinters.

McEvoy regularly brought horses to Queensland when he worked for the Hayes family’s Lindsay Park operation before branching out on his own.

“They used to like to leave it late to come north because it suited them and fair enough,” McEvoy said.

“But I noticed with my own horses if they raced after just arriving in Queensland they could fall to pieces.

“So I decided to get them up here early. It worked with Sunlight and hopefully it will work with this pair.”

Dollar For Dollar has been in Queensland for more than a month and ran third in the Doomben 10,000 before a poor run in the Kingsford Smith Cup last Saturday week.

Despatch was send to Queensland after winning the Group One Goodwood in Adelaide on May 18.

“They worked together on the Eagle Farm course proper on Tuesday and I was happy with them,” McEvoy said.

“They wouldn’t be running if I wasn’t.”

McEvoy said Despatch was a different horse from his last start in Brisbane when he ran third in the Phelan Ready Stakes at Doomben two years ago.

“I was going to trial him at the Gold Coast last week but I was so happy with him I didn’t send him around,” he said.

“He has drawn barrier one which is perfect for his racing style and it is a perfect race for him.

“I am really excited because it gives him a real chance to run a strong 1400 metres.”

Much-travelled jockey Barend Vorster will have his first Brisbane ride on Despatch.

The South African already has an Australian Group One win aboard Sunlight in the Newmarket Handicap after moving from Singapore to join McEvoy earlier this year.

Jamie Kah will ride Dollar For Dollar and will have to overcome barrier 19.

“I am told barriers aren’t everything on this new track so Jamie can show why,” McEvoy said.

McEvoy also had Manuel set for the Stradbroke but elected to spell him after the gelding did not please him in trackwork.

The Bostonian remained favourite on race eve to add the Stradbroke to his wins in the Doomben 10,000 and Kingsford Smith Cup.