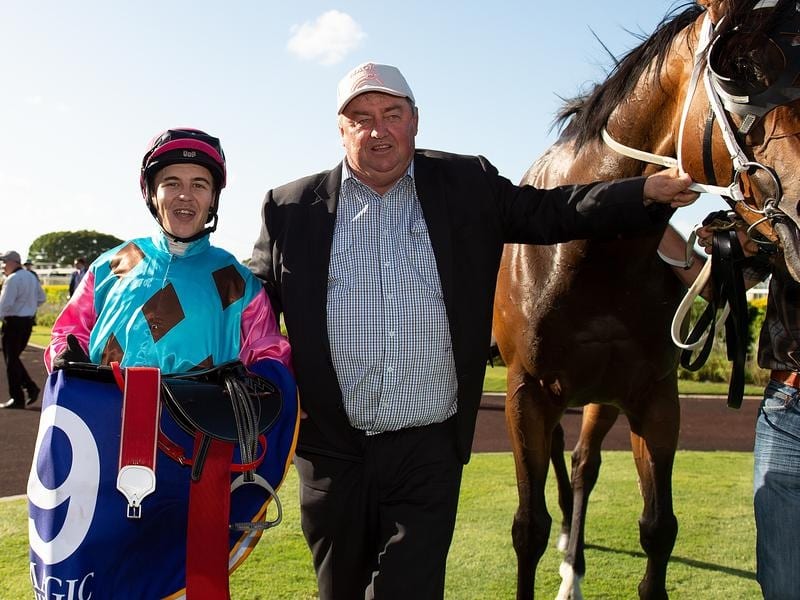 Trainer Kevin Kemp (r) continues to marvel at Tisani Magic who lines up for his 19th campaign start.

Iron horse Tisani Magic continues to amaze his trainer Kevin Kemp as the gelding prepares for his 19th start this campaign.

Tisani Magic faces a tough task in Saturday’s $105,000 Cyril Small Open Handicap (1200m) at the Gold Coast but Kemp believes he can acquit himself well.

Kemp said Tisani Magic thrived on racing and simply loved being around the stables.

“He ran a good third at Eagle Farm last week and he has been bright as ever this week. He is amazing,” Kemp said.

“He just never seems to change. Provided he continues in that vein he can back up on Saturday.”

Kemp said while Tisani Magic had drawn barrier 15 on Saturday it was not a total disaster.

“I know we all want barrier one and that would have been nice. But he isn’t the fastest horse to jump and being drawn off the track might suit him ridden back in the field,” Kemp said.

“After Corey Bayliss’s claim he only has 52kg so he won’t know himself.”

Kemp will also have consistent Star Centre in the QTIS Three-Year-Old Handicap (1400m).

Star Centre was a fast-finishing third at Ipswich at his last start and Kemp has been keen to try him at 1400m.