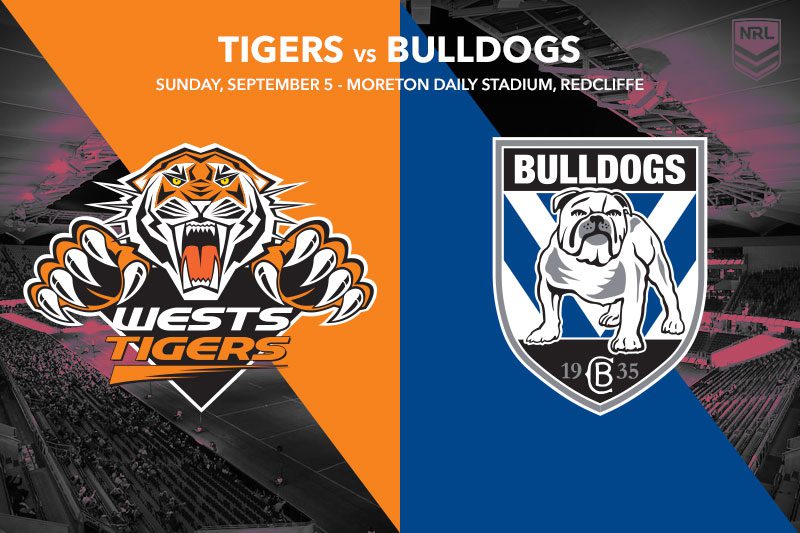 The final game of the 2021 NRL regular season will take place at Moreton Daily Stadium in Redcliffe when the Wests Tigers face the Canterbury-Bankstown Bulldogs on Sunday afternoon.

Unfortunately, this game is a dead rubber, but the consequences for both clubs aren’t great should they lose. If the Tigers aren’t able to get the job done, they will be bagged mercilessly for falling to one of the worst teams of the NRL era. Should the Bulldogs do as expected and lose the game, they will join the 2016 Newcastle Knights on 22 losses in a single season, which is the most since the NRL was formed in 1998.

The Tigers come in as the $1.45 favourite, and it has nothing to do with the recent form. If they were playing just about any other club, they would be the long outsider having given up 80 points in the last fortnight. Thankfully for them, Canterbury have struggled severely in 2021 to score points, hence why they are the $2.75 outsider.

When the pressure is off like it is for this game, you could well see the Tigers loosen their shoulders and play some attractive football. The coach might not like it, but it gives the fans something to cheer about at the end of a wretched season. Tommy Talau has turned into a must-have for any tryscorer legs in NRL multis in the last month, and you can still get $2.20 for him to cross, so be sure to include the blockbusting centre. Ken Maumalo is the other player to get behind, on the back of his recent streak of scoring in four straight games for Wests. He is $7.50 to score the first try or $1.45 to cross at any time. Both options should be well backed. The line of -7.5 appears to be a money for jam situation as well, so be sure to make hay while the sun shines.

There is a chance the Canterbury Bulldogs put all their effort into competing with Manly last week to atone for their 66-0 loss earlier in the year, and as a result they might put the cue in the rack for this game. There are a number of players who are playing for their futures, so there should be no reason the likes of Jayden Okunbor, Corey Allan, Aaron Shoupp and Kyle Flanagan aren’t busting their guts to impress Trent Barrett. Okunbor makes the most sense for an anytime tryscorer bet, having scored in three straight games for the Dogs. Allan has a try in his three most recent games against the Wests Tigers, so he might be another one to include at the $1.91 price.

There is going to be significant turnover in the Bulldogs roster in the summer-time, so trying to find a positive for 2022 means looking at players who will be there. Kyle Flanagan is one such player and has been in and out of the side throughout the season, but he has a great chance to show what he can do against a team who are poor defensively. Luke Brooks on the other side of the field has had more than his fair share of detractors as well, and there is a feeling that a good performance in this contest will only get the response of “well, where was this when it mattered?” Flanagan’s biggest criticism has been that he struggles to play outside of the structure, while Brooks’ big flaw has been his inability to build pressure with his kicking. It isn’t the usual halfback battle people want to see in September, but both have plenty to play for on Sunday.

The Wests Tigers win their ninth game of the season to finish off a rough 2021 and they will cover the -7.5 line in the process. They will score 26 points exactly, which is paying a cool $13.

Why not take the $22.75 on offer for Tigers -7.5 with Jayden Okunbor, Ken Maumalo, Corey Allan and Tommy Talau to all cross the stripe?