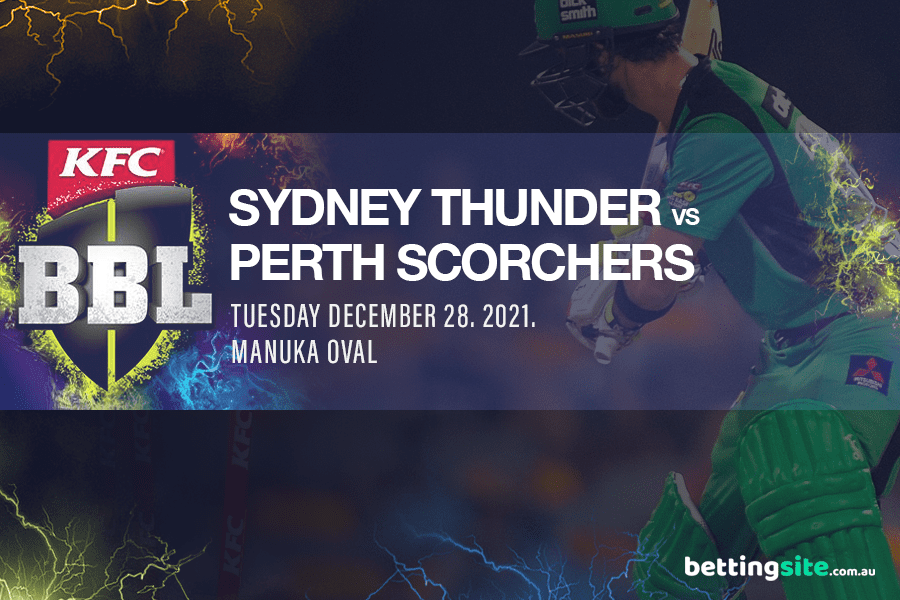 The undefeated Perth Scorchers head to Canberra to take on the Syndey Thunder at Manuka Oval on Tuesday night in the BBL. Having disposed of the Renegades in convincing fashion on Sunday night, the Scorchers will be looking to make it seven wins from seven matches.

Having been convincingly beaten in a rain-affected match, the Sydney Thunder will be needing a positive response on Wednesday night to avoid relegating themselves to being 2-4 approaching the halfway mark of the season. Their bowlers were sent to all parts of the ground against the Sydney Sixers on Sunday, the Thunder will be needing more from the likes of Tanveer Sangha, Daniel Sams and Saqib Mahmood if they are to trouble the Scorchers.

Despite their issues with the ball, the Thunder are one of the most inconsistent teams in the BBL, with a majority of their totals hanging around th4 140-160 mark. With short boundaries straight square at Manuka, the Thunder will be needing a score of 180+ to trouble the likes of Mitch Marsh, Josh Inglis, Colin Munro and Ashton Turner from the Scorchers.

What can you say about the Perth Scorchers though? Their bowling attack has next to no weaknesses. Tymal Mills and Jason Behrendorff are world class with the new ball, whilst Andrew Tye is up there as one of the best death bowlers in the world in T20 cricket. Throw in the twin spin duo of Ashton Agar and Peter Hatzoglou and the all-round abilities of Ashton Turner and Mitchell Marsh and this Scorchers side may be the most complete side in Domestic T20’s around the world.

The Scorchers have won three of the last four encounters between these two sides and considering the form of Mitch Marsh and Colin Munro with the bat in hand, it looks set to be a tough night ahead for this Thunder bowling attack. With all four of their first innings scores being over 165, the Scorchers know how to set the scene when they have bat in hand.

It is remarkable the Scorchers are priced at $1.73 considering their dominance thus far in the Big Bash. Mitch Marsh has 249 runs from his four matches, whilst Colin Munro is averaging 51 with bat in hand. With power hitters like Josh Inglis and Ashton Turner also at their disposal, we expect the Scorchers to have too much power and class for the Thunder in all facets of the game.

There is little doubt that Mitch Marsh is the best white ball cricketer in Australia at the moment. The man known as ‘Bison’ has belted bowling attacks around for fun over the past six months and has continued his form throughout BBL11. With an average of 124.50 from four innings, we expect the Scorchers star to target the short boundaries square on Tuesday night from first drop. With upwards of $3 available for Marsh to top score for the Scorchers, it is too good a price to ignore.