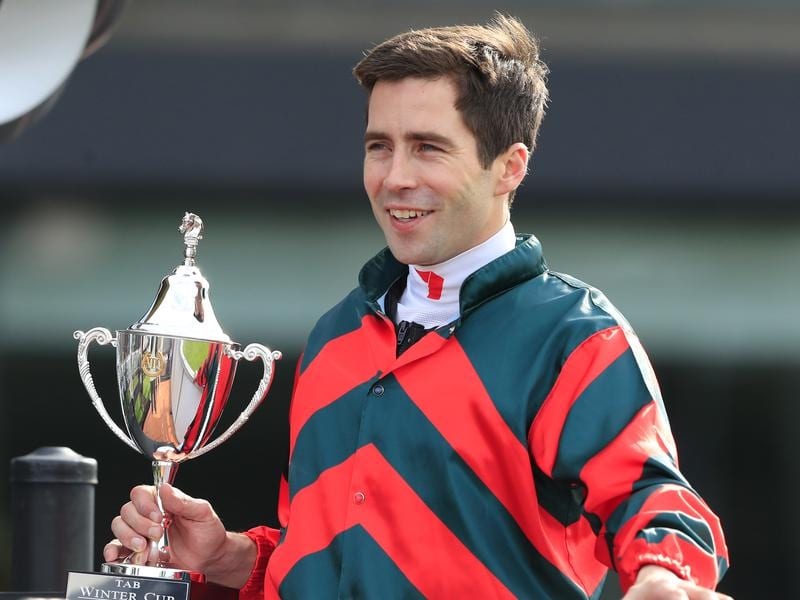 Jockey Adam Hyeronimus has been banned for three years and his cousin and stablehand Blake Paine for more than two years after the pair was found guilty of multiple betting offences.

Racing NSW stewards handed down the penalties on Tuesday after finding Hyeronimus had an interest in 30 bets on thoroughbred races over a two year period.

He was also found guilty of giving false evidence to a stewards’ inquiry.

The penalty has left Hyeronimus’ riding career hanging by a thread, just months after he celebrated his first Group One win aboard Shout The Bar in the Vinery Stud Stakes.

Champion jockey James McDonald was outed for 18 months on a betting offence in 2016 but has returned in full flight, securing back-to-back Sydney jockeys’ titles in the past two seasons.

However, Hyeronimus will face trying to salvage his career after spending double that amount of time on the sidelines.

In considering penalty, stewards took into account it was the first time Hyeronimus had been charged with any betting misdemeanour, however they noted he had previously tested positive to a banned substance.

Two of the charges related to Hyeronimus having an interest in a bet in a race in which he rode, receiving two-year penalties for each offence .

He was issued another 12-month penalty for having an interest in 28 bets in races in which he did not ride, and a further year for providing false evidence at a stewards’ inquiry.

All up, the jockey was banned for six years but will serve parts of his penalty concurrently, halving the totality of the sentence.

Paine has been banned for two years and four months.

Hyeronimus had been riding under a stay of proceedings since stewards opened their investigation and on Saturday he booted home Taikomochi to win at Randwick.

He and Paine will begin their respective bans immediately and both have a right of appeal.