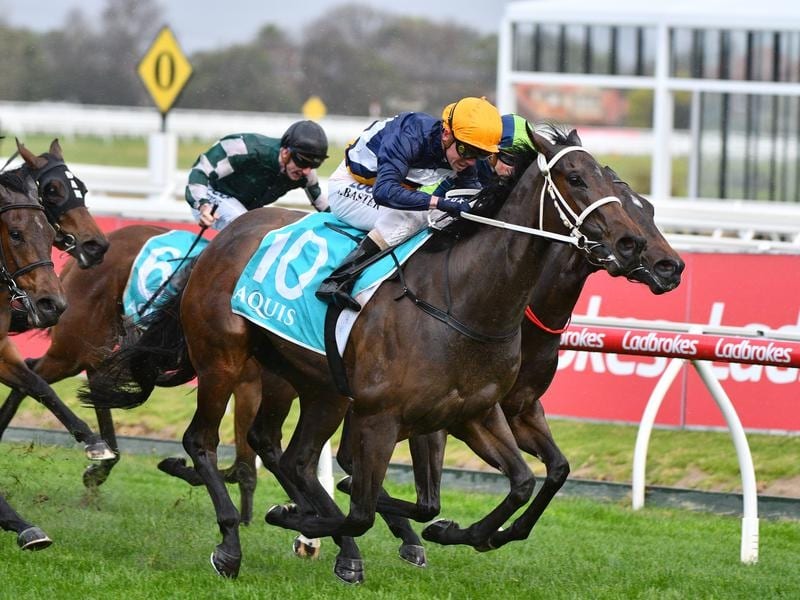 I Am Eloquent will be one of two runners for the Busuttin-Young stable in the Thousand Guineas.

Training partners Trent Busuttin and Natalie Young have been knocking on the door of a major race victory and enter two upcoming Caulfield Classics with high hopes.

The Cranbourne trainers will be represented by The Holy One in the Caulfield Guineas with Acting and I Am Eloquent in the fillies only race, the Thousand Guineas.

Both races for three-year-olds at Group One level are run over 1600m on Saturday.

Busuttin and Young moved to Cranbourne in mid-2016, not long after their Australian Derby success with Tavago, and have collected eight stakes race wins along with numerous placings.

They enter Saturday’s races confident with each three-year-old a last-start winner.

The Holy One won the Stutt Stakes (1500m) at The Valley on September 27 while the fillies each scored over 1400m at Caulfield with I Am Eloquent winning the Jim Moloney Stakes on September 21 and Acting the Thousand Guineas Prelude eight days later.

Young said the stable chose The Valley for The Holy One as it looked a softer option than the Guineas Prelude two days later.

“The field fell away and he drew barrier one there and 10 in the Prelude,” Young said.

“We haven’t done a lot with him since, just ticked him over, but we’ll give him a gallop on Tuesday and then hopefully he can get a nice draw.

“That will be a job for one of the owners, not me.”

Busuttin and Young had to pay a $27,500 late entry fee to have Acting reinstated in the Thousand Guineas after she was inadvertently left out of the field.

Young said that was something they had to wear.

“She’s come through her win in the Prelude great and her work since has been excellent,” Young said.

While Acting ($11) is higher fancied than I Am Eloquent ($26), Young does not expect there to be much between the fillies.

Young said I Am Eloquent was dominant in the Jim Moloney and had came through it in “awesome fashion”.

“She’s bouncing around and it will be three weeks between runs after it was five weeks leading into the Jim Moloney,” Young said.

“Before she won the Jim Moloney she kept up with Acting in that last gallop which gave us a little confidence she’d run well.”