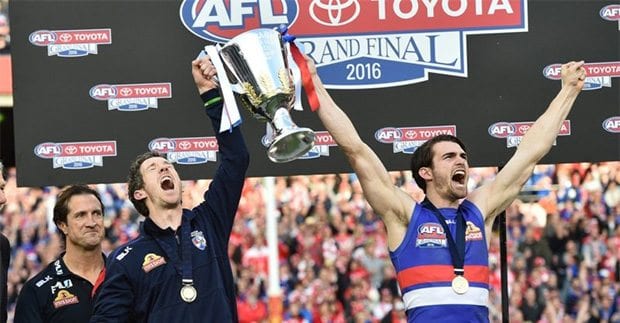 WE are still in the middle of summer, but the less-than-riveting cricket season has AFL fans already lamenting over the time we have to wait for the new season to roll around.

2017 looks to be one of the hardest seasons to predict in recent memory, which makes it an incredibly intriguing proposition for the impartial fan.

Essendon has all their returning stars coming back, GWS is looking to take the next step after a disappointing preliminary final exit, while the Dogs are aiming to go back-to-back for the first time in the club’s history after their breakthrough 2016 win.

We took a look at the top five questions going into the 2017 AFL season and try and make some sense out of what looms as one of the craziest and most unpredictable footy seasons of all-time.

After falling short of reaching their maiden Grand Final in 2016, the AFL looks to be the Giants’ for the taking.

Sportsbet.com.au has GWS as the $4.50 outright favourites for the flag, and justifiably so.

The boys in orange have a finals failure to drive them in 2017, as well as another pre-season for the young bloods who are quickly developing into men. Compound that by the addition of mature aged recruits like All-Australian midfielder Brett Deledio, and suddenly the Giants look even more formidable.

To our eye it looks like it is the Giants’ flag to lose in 2017. Their side across the board has no real weaknesses and their attack is among the best in the competition.

The biggest unknown quantity heading into the 2017 season is Essendon.

On paper, having multiple All-Australian players coming into the line-up should instantly boost the team (which it will), but just how big of an impact the returning players will have is incredibly hard to predict.

The Dons were able to unearth some young stars on the rise in 2016, meaning guaranteed spots in the best 22 – even for the returning senior players – will be hard to come by.

Compound that by the addition of number one draft pick Andrew McGrath and there is justifiably lots of optimism around Tullamarine.

Expectations need to be kept in check however.

Finals should be the goal for the Dons, but a building year where they finish just outside the eight would not be the end of the world for last year’s wooden spooners.

Can Nat Fyfe return to his brilliant best?

At his best Fremantle star Nat Fyfe is the premiere on-baller in the competition, but is the 25-year-old capable of putting together a full season?

After breaking his leg for a second time in eight months at the beginning of 2016, the long-haired midfielder subsequently went to the United States late in the year in order to get a head-start on the competition.

To say Fyfe came back in sensational shape would be an understatement.

Fyfe’s preparation has never been in question however, it has always been a durability issue.

Breaking the same leg twice is never a good sign for an elite athlete, but Fyfe’s class cannot be denied.

We are backing Fyfe to come back with a vengeance, and the 2015 winner looks to be great value for the Brownlow medal as the $9 second favourite at WilliamHill.com.au.

Collingwood is a team that demands success, but it has been awhile since the Magpies has been a legitimate premiership threat.

Any team that is not winning matches and playing in September will deal with pressure, but Nathan Buckley’s extraordinary comments late in 2016 raised the eyebrows of the collective footballing public.

When asked if he would remain as the Collingwood coach post-2017 if the Pies missed the finals Buckley responded by saying “There’s no way.”

Does the coach’s comments provide the spark Collingwood needs to surge back up the ladder, or is it an unnecessary distraction heading into a pivotal year for the Pies?

If everything goes right, Collingwood has the right team to force their way into the eight.

Collingwood’s defence is a huge weakness, but teams have shown in the past that a system focused on pressure and accountability can outweigh personnel.

It is finals or bust in 2017 for Bucks – if they fail to make the eight the former Collingwood skipper will be the third of the big three club legends (Essendon’s James Hird and and Brisbane’s Michael Voss) to get the axe.

Can the Bulldogs go back-to-back?

If there is any club in the league that deserves a premiership hangover it is the Western Bulldogs.

The Dogs broke a 50+ year premiership drought in 2016, and if history has shown us anything it is that teams that are success deprived often fail to maintain the fire once they have broken through.

Can the Dogs learn from the mistakes of the past? We think they are more than capable.

By all reports the Western Bulldogs got stuck into training very quickly after their breakthrough and all look in great shape heading into 2017.

Compound that by the additions of Travis Cloke and Stewart Crameri, both of whom add some presence and maturity to a young forward line and you have the makings of a team who has the ability to win a second flag in as many years.

The Dogs are $5.50 second favourites for the flag at WilliamHill.com.au.