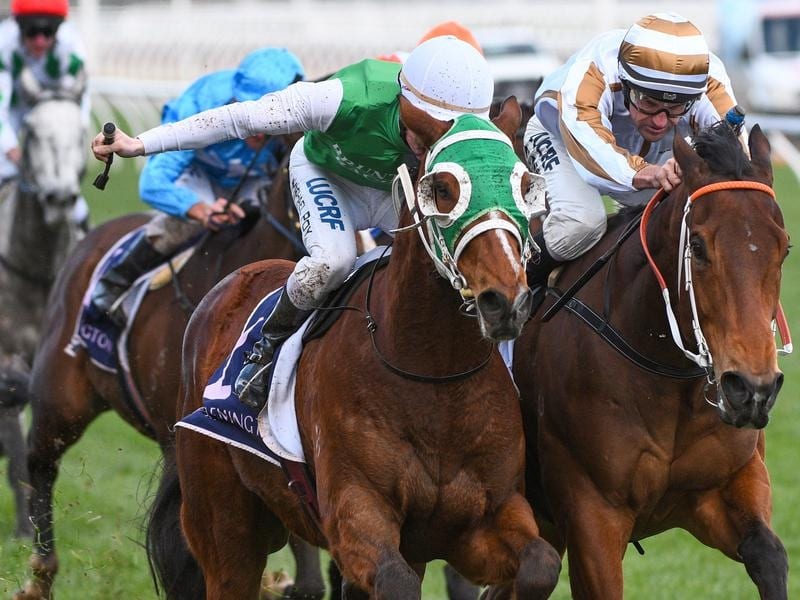 The Inevitable (left) has made an ideal start to an ambitious campaign, scoring at Flemington.

A change of plans to swap straight-track races at Flemington has led to Tasmanian galloper The Inevitable recording a first-up win.

Instead the VRC Member Brenda Nugent Handicap over 1000m was chosen for the four-year-old who was successful at Flemington during the autumn in the Group Three CS Hayes Stakes.

Ridden by apprentice Michael Poy, The Inevitable ($8) scored a half-head win from the $1.75 favourite Assertive Approach with Queen Annabel ($16) three lengths away third.

Brunton accepted the recommendation of his partner Tegan Keys that The Inevitable would not be fit enough for a first-up assault on the Aurie’s Star.

“Teg’s and I had been over at Cranbourne with a few horses and she did a bit of work on him and thought he maybe lacking a bit of fitness,” Brunton said.

“So we dropped back to the 1000 metres, sold it to the boys who want to have a bet, and it’s worked out very good.”

What The Inevitable may lack in size he makes up for in heart and Brunton is now eyeing a bigger prize in Sydney.

The next target for The Inevitable is October’s Silver Eagle, the prelude race to the $7.5 million Golden Eagle at Rosehill on November 2.

“He’ll go home for a couple of weeks now and then we’ll head up to Sydney.

“We’ll give him a couple of trials and see if we can get the best out of him up there.

“There’s some good dollars there, but we’ll deal with small steps first.”