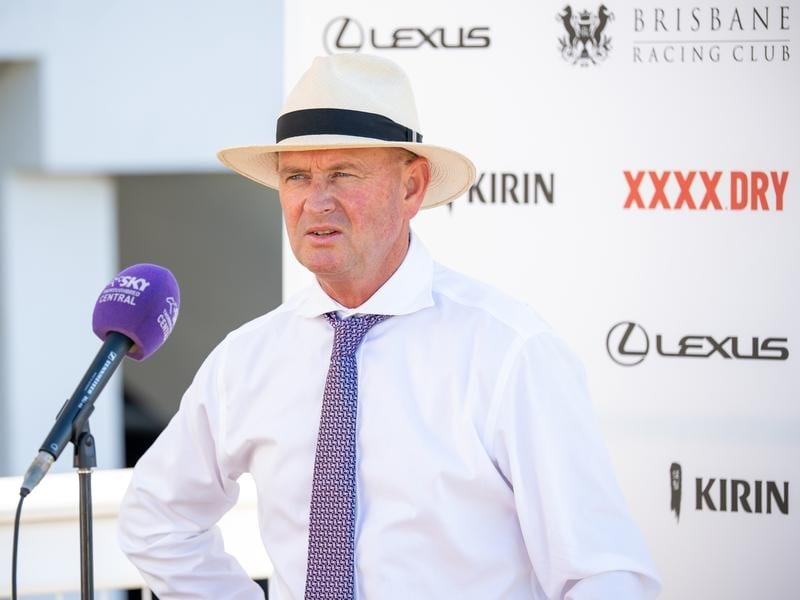 Trainer Toby Edmonds has strengthened his hand in the Group One JJ Atkins at Eagle Farm.

Co-trainer Toby Edmonds believes there is little between his Gold Coast winner The Drinks Cart and JJ Atkins favourite Wisdom Of Water as the colts head to the Group One race.

Sent out a warm favourite, The Drinks Cart ($1.65) had no problems cruising to a win after sitting back in the field in the QTIS 2YO (1100m) on Friday.

Edmonds, who trains in partnership with his son Trent, said The Drinks Cart would now join Wisdom Of Water in the JJ Atkins on June 6.

He had earlier had some reservations about The Drinks Cart at the 1400m that is on offer in the Atkins.

“We scratched him from the Champagne Classic at Eagle Farm to run here with the idea of getting him to settle,” Edmonds said.

“He did that and there was plenty left after he made his winning run.

“Robbie (jockey Fradd) doesn’t think there is much between The Drinks Cart and Wisdom Of Water.

“There hasn’t really been much between them when they have clashed so they both deserve a go at Group One racing.”

The Drinks Cart has now won more than $100,000 in prize money, ensuring he will get a start in the Atkins.

Wisdom Of Water had his lead up run to the Atkins when he easily won the Ken Russell Memorial Classic last week.

Jockey Matt McGillivray continued his good run with the Edmonds partnership when Mr Bellagio ($3.20) made it three wins in a row and his first in open company.

McGillivray has done much of the riding for the Edmonds team during the past few months and it was his 19th win for them this season.

Premier trainer Tony Gollan continued his march to his target of 100 metropolitan winners for the season when Advance Warning ($3) gave him his 88th victory in the Great Northern Handicap (2200m).

Gollan holds the Queensland metropolitan winners record at 90 and with two months of the season left looks certain to better it.